The Aravalli Hills ‒ among the world’s oldest ranges ‒ stretches about 800km from the edge of Gujarat state through Rajasthan to the very fringes of Delhi. For the most part they are fairly rugged and cloaked in forest, dotted with a handful of pretty lakes, obscure villages, esteemed holy sites and a clutch of temples filled with some of India’s most virtuoso carving.

Most visitors simply pass through these hills en route to, say, the lakes and palaces of Udaipur, or the sacred little town of Pushkar, the great temple of Ranakpur or the unhurried tranquillity of Sariska National Park. But there are no designated hiking trails, never mind signposts, and it’s not an area that lends itself to random, play-it-by-ear exploration. How, then, to enjoy the Aravalli on foot and embrace the great outdoors? 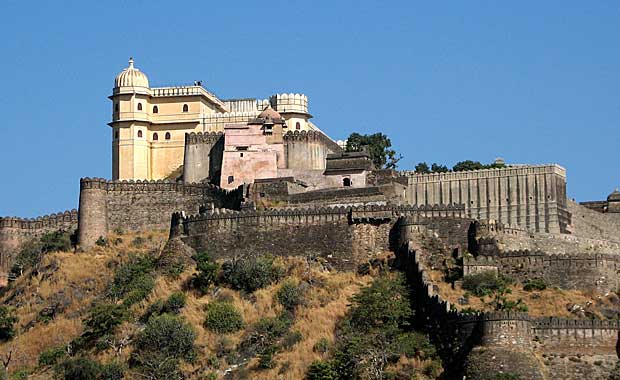 One simple answer lies in Kumbalgarh Fort near Udaipur. Built in the 1400s by Rana Kumbha, a ruler whose prowess saw the construction of thirty-one others, it lords it over the Aravalli range at around three and a half thousand feet. There is no other fort quite like it ‒ or as high ‒ in Rajasthan. 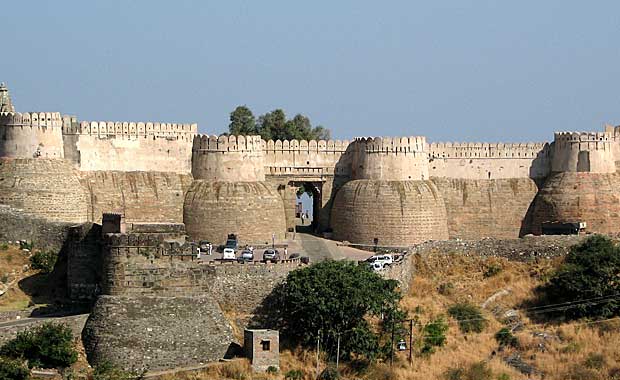 Three imposing gateways guard its approaches while another four protect a citadel crowned by the Badal Mahal, or ‘cloud palace’. While by Rajput standards the buildings are not truly palatial, their views are sublime. Little seems to have changed since Colonel James Tod, writing of an 1818 visit in his classic Annals and Antiquities of Rajasthan, evoked a panorama “over the sandy deserts and the chaotic mass of mountains, which are on all sides covered with the cactus…” Yet, after decent monsoon rains, the distant plains can be surprisingly green.

Perhaps most striking of all is Kumbalgarh’s vast encircling wall. Tall and muscular with crenellations, loopholes and splayed bastions, it winds around the edge of an undulating plateau much like China’s Great Wall. Many local guides and books still wrongly claim its perimeter extends for an astonishing thirty-six kilometres but even on a short visit some years back I had been doubtful. 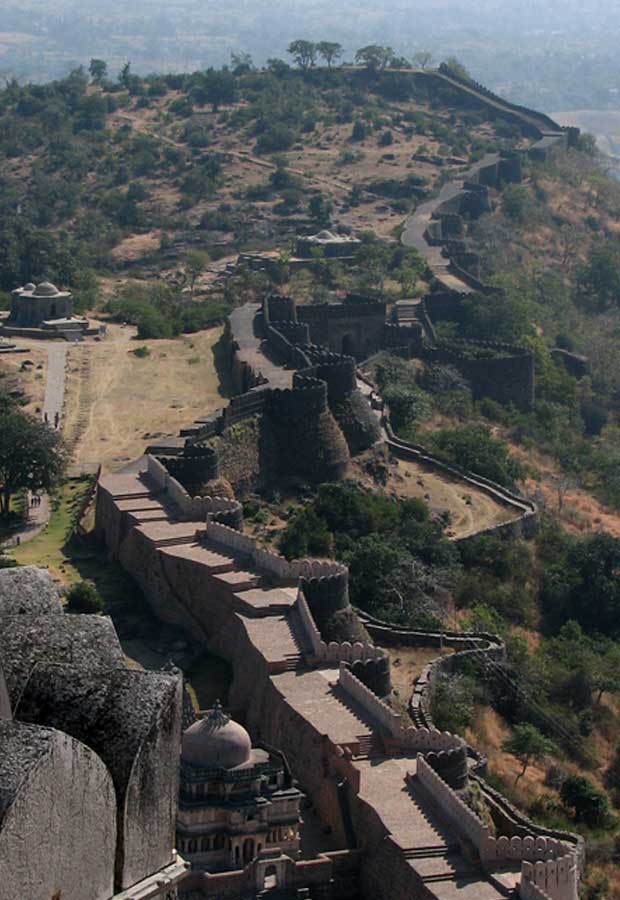 Now, with a full day set aside to ramble, I set off anti-clockwise along the broad ramparts designed for patrolling guards and even horses to move with ease and speed. Within minutes, you feel (and indeed are) deep within the Aravalli countryside. After a few minutes more you’ll likely leave behind whatever groups of visitors have cursorily investigated the ramparts this far and then thought better of going any further.

Their loss ‒ even laziness ‒ was my gain. The wall drops steeply to a few spurs and then snakes north by the rim of a deep valley. Of the township that once thrived here, just a few modest temples – some of their sculpture and decorative motifs still intact – remain, and I paused here and there to imbibe the atmosphere and soak up the views. 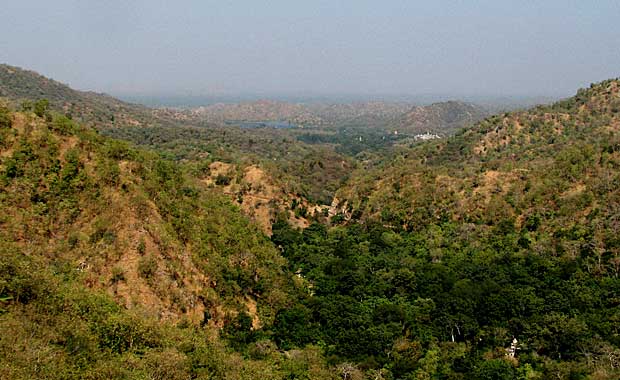 At an ancient baori ‒ a deep traditional well with a broad flight of steps reaching down into its innards ‒ I watched villagers fill cans of water and load them onto patient camels. We shared sweet custard apples they pulled from nearby trees and then they trudged away, caravan-style, towards home. Though Kumbalgarh is now government property overseen (like most monuments) by the Archaeological Survey of India, two distinct hamlets remain within its walls. Later, near Bheelwara village, I watched buffaloes tilling fields from atop a part-ruined stepped embankment, while locals bathed and washed clothes in a cluster of picturesque rock-pools.

Ideal for a meaty day walk, the great perimeter wall proved to be no more than around fifteen to seventeen kilometres. Restored just over a century ago, it’s still in remarkable condition, with just two small breaches and a handful of mildly overgrown sections. And I had it pretty much to myself. For most of the way the lofty Badal Mahal, a useful beacon, remains visible and you can easily take shortcuts back to the drinks’ vendors by the main gates. 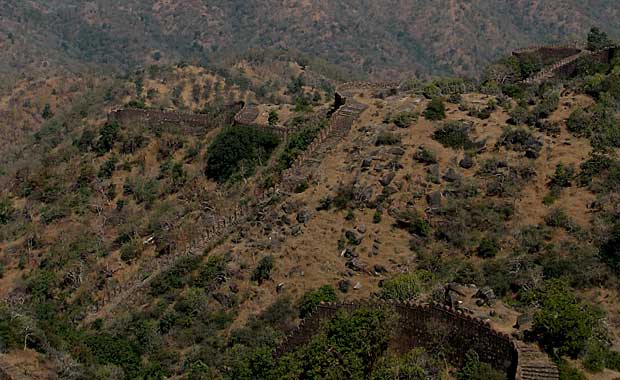 Kumbalgarh Fort wall snakes away in the distance…
©

I made a day of it. At sundown, I lingered by an ancient airy temple whose voluptuous stone apsaras, or carved dancers, blazed molten amber. The citadel perched on a hill behind. Few spots in Rajasthan are both so quietly exotic and casually exclusive.

I am in a world of water It hangs from trees like a thick mossy coat. It tumbles in cascades and floods of rushing streams.

Kaziranga and the Big Eight

Our guide, Hrishi, was obviously proud of his park, but I had come with few expectations of what we might see here; perhaps one or two rhinos if we were lucky and maybe a wild elephant – I would be happy with that.

21st June – 5th July 2017 When it comes to a holiday, my idea of heaven is: somewhere fairly private and quiet, a short distance from a beach and other resort amenities, plenty of sunshine, a nearby swimming pool, comfortable sunbed and my fully charged Kindle.