Tiger Safaris in April
Back
Asia

Anyone who knows India knows that April is hot in the sub-continent, especially in the south, with the heat and humidity starting to build up as the monsoon approaches. Although it can be a bit too hot for comfort, I’ve always known this is also a good time for seeing wildlife. This April I went on my first tiger safari at this time of year in Nagarhole National Park in the south of India.

My previous experiences on safari in India have been after the monsoon rains, in October, November and December, when the weather has been cooler and the vegetation lusher. Travelling in April, everything was much drier, especially in Nagarhole. The monsoon rains were not good in the south of India last year, and the Kabini River which forms one edge of park has almost dried up. What this means is that the wildlife tends to be concentrated around the remaining water sources, and with less vegetation to block the view everything is easier to spot. The guides know exactly where the water is within the park, and when the best time is to visit the waterholes. 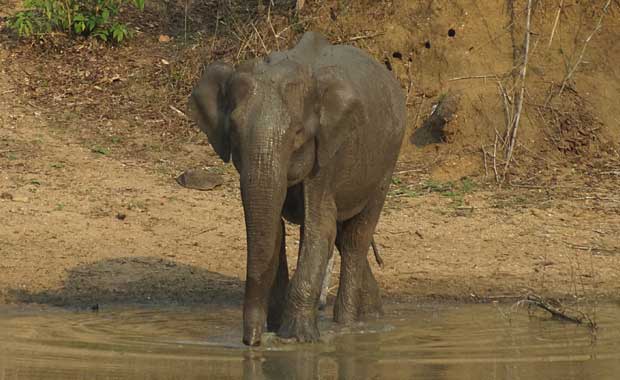 I visited several different waterholes in the course of an afternoon safari in the park, and each was different. The waterholes are great places for seeing elephants of course. They come to the waterholes to drink, and also to cover themselves with mud to protect their skin from the strong sun. Nagarhole is one of the best places in India for seeing elephants; you don’t find wild elephants in the parks of Central India. Other waterholes attracted an incredible variety of birds, including big flocks of brightly coloured painted storks. In between the waterholes, I had a great sighting of a young male gaur, commonly known as the Indian bison. This big young male was in prime condition, and even a tiger would think twice about challenging him.

And would I be lucky enough to see a tiger for myself? Yes, our guide heard that a tiger had been sighted at one of the waterholes, and we rushed over to see for ourselves. The number of vehicles in Nagarhole is very limited, so you never got the big scrums of vehicles that used to be seen in Central India around tiger sightings, and there was just one other vehicle there looking out over the waterhole. The tiger was a long way off and it took some searching to finally locate it; a big male happily wallowing in the mud at the edge of the waterhole, enjoying the chance to cool off. While not the best sighting I have ever had of a tiger, I was very impressed to be able to see one after such a limited time inside the park.

Travel writer and photographer, Aaron Millar, travelled to India where he experienced some very special moments.

A week in Bhutan

Wendy and Anne Britt travelled with us to Bhutan in October, and told us “We fell in love with Bhutan, the nature, the people, the ethos, everything.