Do not miss out on Quito, gateway to the Galapagos - Tribes

Back
Quito is not a place on the wish list of most travellers but as gateway to the Galapagos Islands, it’s an opportunity to see a little of Ecuador.

We receive a lot of enquiries from clients who visit our Galapagos Specialists website and, as you might imagine, the focus of these enquiries relate to visiting the Galapagos Islands.  To get there you do have to fly into Ecuador first – usually Quito or Guayaquil – and it seems a pity to miss the fantastic often unthought-of gem which is the Ecuadorian mainland and the city of Quito. Most Tribes’ guests fly into Quito first, and often have just the one night there. You are likely to be surprised on arrival at how modern the airport is. It was only opened in February 2013 to replace the old airport which sat in the middle of the city and could no longer safely handle the increasing volume of larger aircraft and passenger numbers. It sits about 11 miles East of Quito (at 0 degrees Latitude on the Equator) To make this easy for you, we generally have a representative meet you in the arrivals hall to guide you through to your private transfer for the 40-minute journey (a little longer at peak hours) to the city centre.

Quito itself, a UNESCO World Heritage City, sits at 2850 metres (9350 feet) in a spectacular setting. It is quite something when coming from the mainly flat Suffolk, where I now live and work, to be surrounded by mountains (and an active volcano) on all sides.

I looked around at residential houses on different hills and, while they are only separated by short distances in a straight line, getting from one to the other looked like a game of snakes and ladders. I asked my guide how people visited each other, to which he wryly replied, “Down, around and then up.”

It’s also a pretty good description of walking around Quito, either going up or going down, but the architecture and views are certainly worth it. I did a little online research before leaving and read that, “The historic centre of Quito has one of the largest, least-altered and best-preserved historic centres’ in the Americas”, and it is a sentiment I can certainly agree with. I was fortunate to be accompanied by a genuinely interesting guide who clearly possessed a depth of knowledge of Ecuador’s pre- and post-colonial history, people and culture. 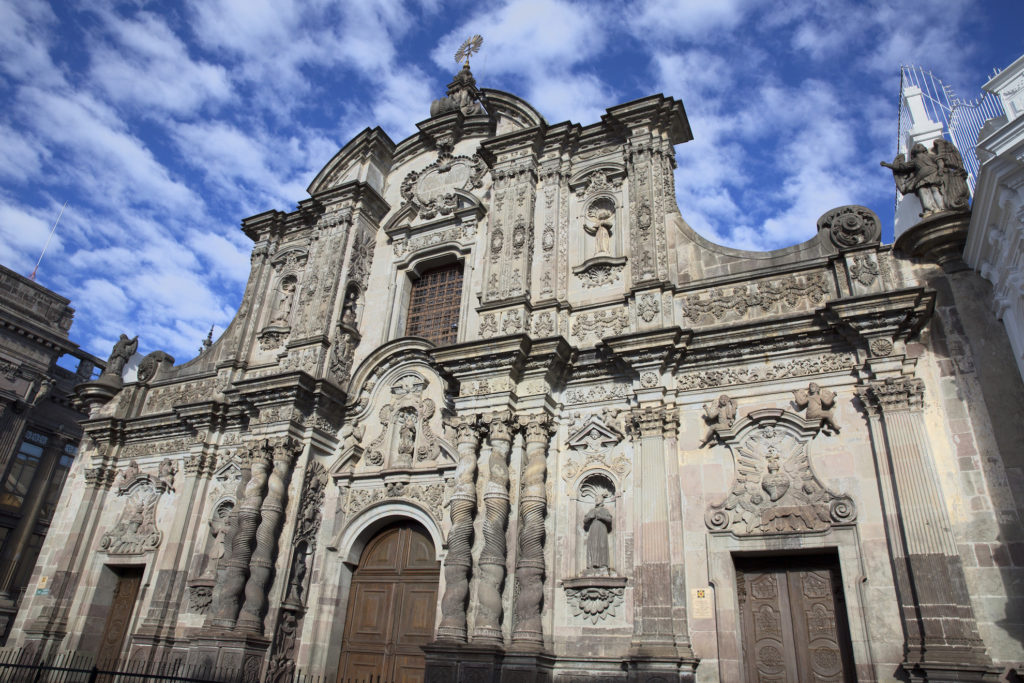 Two things which fascinate me – and travel provides the opportunity to experience them – are nature and culture. I was glad to have a good guide in Quito so that when we visited the Church of La Compañía de Jesús, a Baroque style church begun in 1605 and built by Native Americans, he was able to point out some things which he knew would interest me.

The church itself took 160 years to build; men spent their entire working lives on it and went to their graves never seeing it completed. Inside, the whole church is profusely decorated with gold leaf, the attention to detail is something that must be seen to be believed. I am not religious at all but found it to be quite moving.

My guide wanted to show me something at the high altar and, as he pointed out the different figures, he asked me what I could see above them all. It was the symbol for Inti, the ancient Incan Sun God, so I asked him how it got there in a Catholic church.

“That’s how the Spanish encouraged the native people to embrace Christianity. They said ‘Look, even your own Sun God shines down on our religion.’”, he replied. Right there above the altar was the historic intersection of two very different cultures 400 years ago, preserved in gold leaf. I would have easily missed it without my guide, instead it turned into one of the memorable moments for me where a work of art brought history and culture alive.

There is so much more to see and do that I wished I had longer there myself. One night is definitely not enough to do justice to the culture and architecture of this amazing city. A gateway to the Galapagos, yes. But also a destination in its own right.

Everything in Chile revolves around its capital, Santiago de Chile With over seven million people, nearly half of country’s population live in the city, with many more in nearby towns and cities.

Taking the Cable Car to Kuelap

In 2017 Peru opened its first cable car Climbing up a steep slope, bypassing a winding road, the cable car makes access to one of Peru most important archaeological sites much easier.