UK: 01473 890499
US: 1-800-608-4651
You are here: HomeArctic And Antarctic
HOMEDESTINATIONSHOLIDAY TYPESEXPERIENCESTRAVEL + PROTECTREVIEWSCONTACT US
MENU
Arctic and Antarctic holiday ideas accommodation places to go reviews

About 98% of Antarctica is covered in ice about 1.6kms thick, it has a number of rivers and lakes, is divided by the Transantarctic Mountains and is surrounded by the Southern Ocean. It contains the South Pole and lies largely within the Antarctic Circle. It is a polar desert with most of the land over 2kms high, and has 6 months of darkness followed by the austral summer (November to March) of almost total daylight, the latter being the tourist season. It’s a remote destination, and reaching it is very much part of the experience, making it feel more of an expedition than a holiday, a feeling reinforced as you explore by zodiac, kayak and on foot led by an experienced polar guide.

For centuries before it was first discovered by man in 1820 there were myths of a ‘Terra Australis’, or southern land, whose existence was believed to ‘balance’ the known land masses in the northern hemisphere. The heroic efforts of Scott, Amundsen, de Gerlache and Shackleton at the turn of the 20th century have captured the imaginations of subsequent generations. In 1959 the Antarctic Treaty proclaimed Antarctica a scientific preserve and today the continent’s human population comprises up to 5,000 scientists (falling to 1,000 in winter) based in some 70 research stations.

A trip to Antarctica, the largest wilderness on Earth, is an authentic adventure, travelling where few have ventured, and is certain to leave you with lasting memories.

popular holidays in Arctic and Antarctic

An introduction to the fascinating continent of Antarctica. Explore the nature, wildlife, science and history of the area.

Fly across the Drake Passage to your comfortable expedition ship for a wonderful cruise among the stunning scenery and wildlife of the Antarctic.

Below you'll find some of our very favourite places to stay in Arctic and Antarctic. However you can also see our full directory of properties by clicking the "All Places to Stay" button. 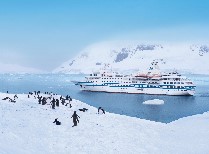 We know and love Arctic and Antarctic, and would be delighted to help you plan your perfect trip here.

Start planning your tailor-made holiday to Arctic and Antarctic. Tell us what you want, and we will tailor make your perfect trip.
Call: 01473 890499
PLAN MY TRIP

 Language: English is the most widely spoken language

 Visas: Not required for British nationals for Antarctica, South Georgia or the Falkland Islands.

 Health: None required but tetanus may be recommended. No other vaccinations are compulsory.