Saadani is not one of Tanzania’s famous national parks, and many visitors have in fact never heard of it.  It is about 4 hours drive north of Dar es Salaam, and holds a fairly unique position for a national park in that it has a large length of coastline.

So the unique thing about Saadani is the merging of the bush and the beach.

Visitors have seen pied kingfishers out at sea, and baboons and elephants on the beach!  Also, given its coastal position the habitat is very diverse. As well as inland grasslands and woodland, there are areas of mangroves, some unexpected tidal creeks encroaching into the mainland from the Indian Ocean, and some really stunning salt flats. Walking the salt flats and looking at the prints is fascinating when you have a good guide who can tell you what has been going on by simply reading the signs. 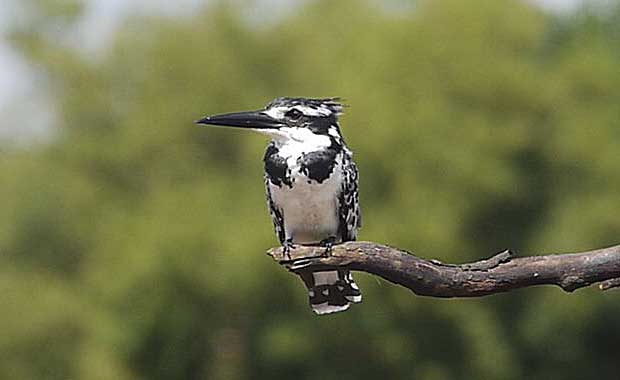 Wildlife in the park is still not as good as you are going to get in the better known parks, but it is improving all the time, and the game viewing experience can be unique given the landscape. Elephants are quite often seen here now, and thanks to the Saadani Elephant Project and one collared matriarch, the researchers based at Tent with a View Safari Lodge always know roughly where they are.  Waterbuck are common here, and there are other plains game such as impalas, giraffes, zebras, warthogs and so on.  Lions are also becoming more commonly seen.  So you can often have a good safari experience, and certainly the experience on being in the wild here is special in its own right.

Two of the lodges are on the beach with the Indian Ocean as the view from the rooms.  However, this is not a beach holiday spot, and due to the very shallow waters (which go out a long way at low tide), if swimming in the sea is a priority, this is the wrong place for you.  You’d be better to see Saadani then travel slightly further north to Pangani, where The Tides Lodge has a great beach for swimming.

Saadani is still a relatively little-visited park, and of course that means that you’re never going to be tripping over lots of other vehicles as in the more famous reserves. This is remote and there are very few lodges in the area.

View of the Saadani bush interior
©

The only lodges in or near the park are: Tent with a View Safari Lodge & the Roof of Saadani, Saadani Safari Lodge & Saadani River Lodge, and Kisampa. All properties offer something different.

Kisampa: This is outside of the park, to the south. It’s in a community-owned conservation area, and it doesn’t have a coastal section. It does however offer a wonderfully relaxed look at an unspoilt piece of rural Africa, with marshlands, oxbow lakes, grasslands and hills.  You have this huge area to yourself and it’s a tranquil, fabulous experience. I’d recommend you take a look at the camp web page.  The camp also has very strong links with the local village of Matipwili. 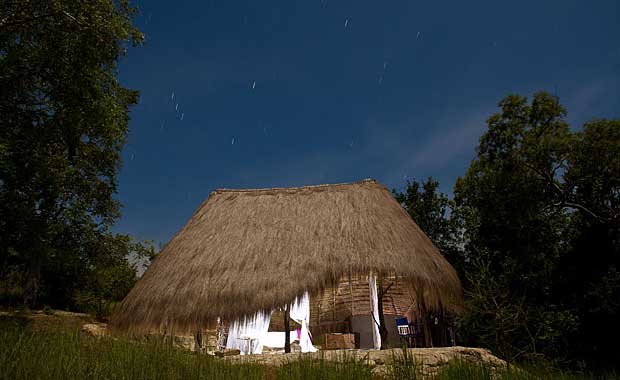 Whilst Kisampa is close to Saadani, I wouldn’t particularly recommend it as a base from which to explore the park. It is best used for its own strengths.

Tent with a View Safari Lodge and the Roof of Saadani:  These are both run by the same company and are both just outside of the park (due to a chunk having been missed out of the park when it was gazetted, which is, frankly, silly).  So both of these properties are on a huge area of private conservancy land surrounded by the park and with trips into the park being taken as and when wanted. 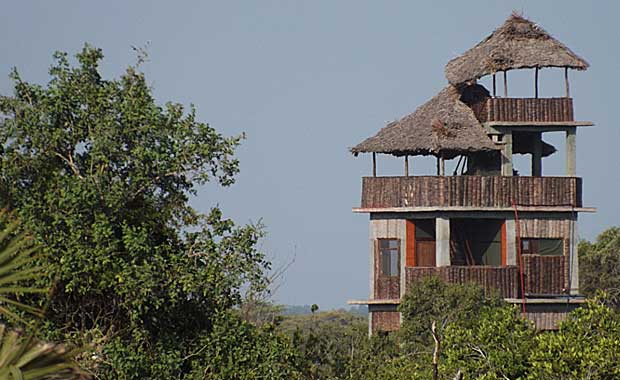 The roof of Saadani
©

The Roof of Saadani is a tall tower with 4 floors and you can use this as your own private lookout post (with bedroom, your own guide and vehicle, and bar and chef to hand!). It feels slightly surreal, but it’s excellent fun. Train your binoculars on the surrounding land for a full 360 degrees, then head out to see what you can find.
Tent with a View offers 11 beach bandas (tented rooms on stilted platforms) of good quality and a main open thatched building with bar and restaurant. This is also the site of the Saadani Elephant Project.  It is an excellent and friendly place to experience Saadani from, and run by committed conservationists.

Saadani Safari Lodge and Saadani River Lodge:  These are both run by Sanctuary Retreats and are within the park just south of Tent with a View.  River Lodge is the more upmarket of the two, catering for people who want aircon and TVs in their room.

The safari lodge is right on the beach and has 9 standard and 5 deluxe rooms, plus a suite.  It has two pools, a large open airy restaurant and various nooks and crannies to sit in and enjoy the surroundings. It is a good lodge, and possibly the better choice for you if you are erring towards relaxation here rather than exploration.