Peru – Chachapoyas and the fortress of Kuelap - Tribes
Back
Latin America

Peru – Chachapoyas and the fortress of Kuelap

As we trudged the last few steps to summit the lofty ridge, Alfredo, my guide, noted casually that all a man needed here in Chachapoyas was a machete, Wellingtons and a horse. Well, he had the machete, we both wore Wellingtons and somewhere far below grazed our sturdy horses.

Before us stood a trapezoid gateway set in large blocks of finely cut masonry. The fortress’s encircling walls stretched away either side. Beyond the portal, we entered a cleft-like tapering passage open to the sky. A dozen or so carvings depicting a face, some serpents and perhaps a bird lined the short passageway which rose to a second slender opening just wide enough for one person at a time. 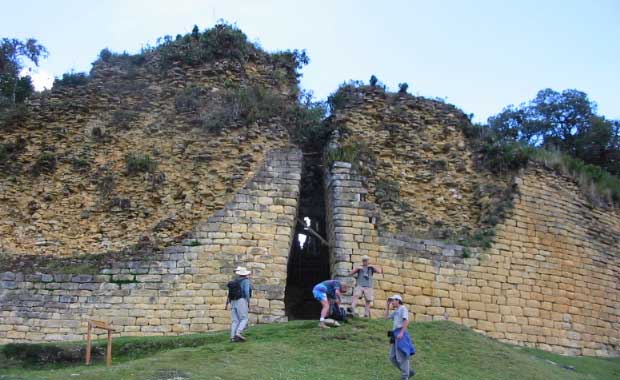 Chachapoyas town is the capital of northern Peru’s Amazonas Department (though much of this vast area is far removed from anything truly Amazonian) but ‘Chachapoyas’ also refers to an area corresponding to the lands once ruled by the Chachapoyan people. It was the Incas who called this mysterious tribe ‘Chachapoya’ – people of the clouds – and even today little is known about them.

It seems they were a tough and belligerent lot who held their own in difficult country. They were famed as shamans and traders in forest products such as exotic feathers from the Amazon basin. Their unusually fair-skinned women were noted even by Spanish priests. The cloud forest hills around the Utcubamba River appear to have been the Chachapoyan heartland. Kuelap, their remote enigmatic fortress, is the region’s outstanding site but there are enough forest-cloaked ruins and eerie burial sites to keep budding Indiana Jones’s busy for weeks if not months.

Shaped rather like a half-kilometre long ship with rounded ends and a broad mid-section, Kuelap’s ten- to twenty-metre high pale yellow masonry walls crown what is a spectacular naturally fortified site. As we headed inside I saw the remains of roundhouses, low-walled huts standing on stone plinths which once boasted tall conical thatched roofs. In the mid-1990s one was completely rebuilt and beautifully re-thatched. It doesn’t take much imagination to realise just how impressive this must have looked in its 15th-century heyday when the ridge bristled with up to five hundred such houses. 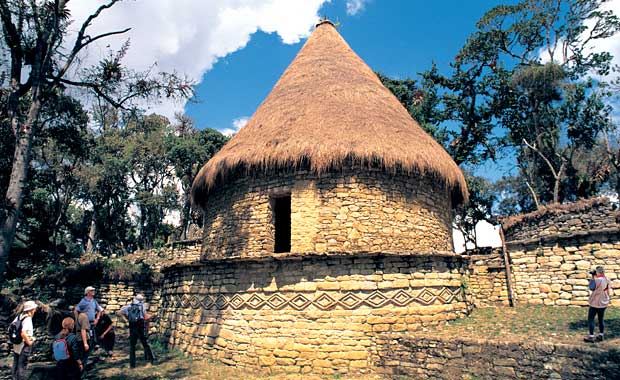 Alfredo explained how the fortress had several distinct quarters. We strolled up to the ‘Pueblo Alto’, or upper town, and a D-shaped watchtower, the ‘Torreón’, at its tip.  We paused at the peculiar Tintero or ‘Inkwell’, a sort of inverted cone-shaped pit which archaeologists conjecture could have been a sacrificial shrine or solar observatory (perhaps to gauge the onset of the rains and the maize-planting season). Then, at one point, Alfredo carefully moved a loose rock from a wall, reached into the nook and gently extracted a human bone. “Post-mortem burial” he announced solemnly. It was a common practice here but most of the hundred or so reburials in these walls have long been looted.

We ate a picnic lunch down beside the site’s small office and then, while Alfredo chatted to the guards, I returned alone for another foray. The handful of morning visitors had gone and I had Kuelap and its strange brooding atmosphere to myself. 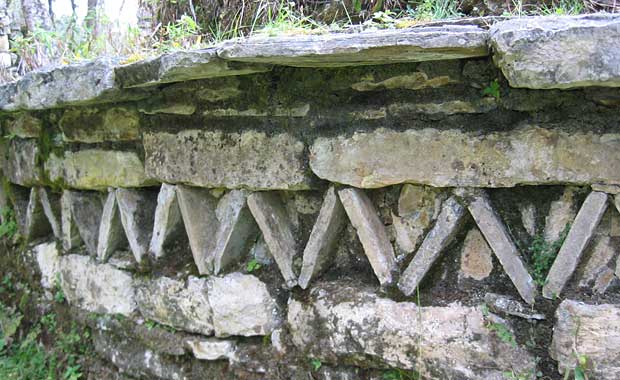 The fortress covers around six hectares but it’s reckoned the entire outlying settlement of terraced fields and hamlets was perhaps seventy or eighty times that. Alfredo had explained how it was finally conquered by the Incas in around 1470 when, it’s estimated, three thousand people lived here. Just sixty years later the Spanish invaded the region and eventually built the present-day town of Chachapoyas around 25km to the north. And then, oddly, despite their conquest during which Kuelap could hardly have gone unnoticed,  they seemed to have forgotten about it until the 1840s when a roving judge from town apparently ‘rediscovered’ the site and sparked renewed interest. 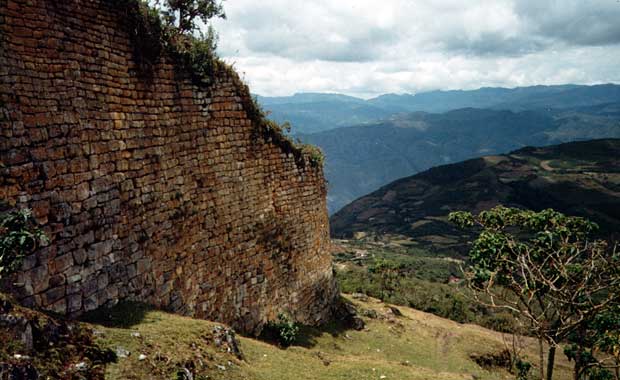 Sitting by the watchtower gazing across to muscular sun-dappled hills, I thought how deceptive the landscape looked. All was voluptuously lush and green to the horizon yet I was at about three thousand metres. There was an almost European softness to the landscape dotted here and there by grazing cows. Yet the rustic adobe houses with corrugated roofs clearly suggested elsewhere. The climate, too, is marked not so much by hot or cold, but idyllic, generally dry winters and soaking summers of muddy tracks and sodden villages.

And where was the cloud forest? Well, it still crowned most of the hilltops and lower down there were random groves and thickets full of orchids, bromeliads and velvety fuchsia. The Chachapoyans would have cleared extensive tracts to grow potatoes and high-altitude grains, but much of the remaining forest is now under pressure from expanding farms and immigration.

In the following days I was to see what other Chachapoyan ruins and tombs were like, forest and all, with my new local guide Jose to slash a way.

The west coast of South America is bordered by 4,300km of the glory that is Chile. Here you will find simply astonishingly beautiful and diverse landscapes, from arid desert and lush winelands to temperate rainforest and sparkling glaciers, an amazing diversity and richness of wildlife and a fascinating culture - plus some great food and excellent wine.

A self-drive safari in Kruger

I have been on a number of guided, self-drive, camping, lodge etc. safaris and I have to say that whilst I love the professionalism of the guides, with all their knowledge that I couldn’t hope to learn, the off-roading and being able to get up close to the wildlife, there is nothing quite like driving yourself through somewhere like the Kruger National Park and coming up on anything from a massive bull elephant in must to a tiny mongoose skitting along the roadside.