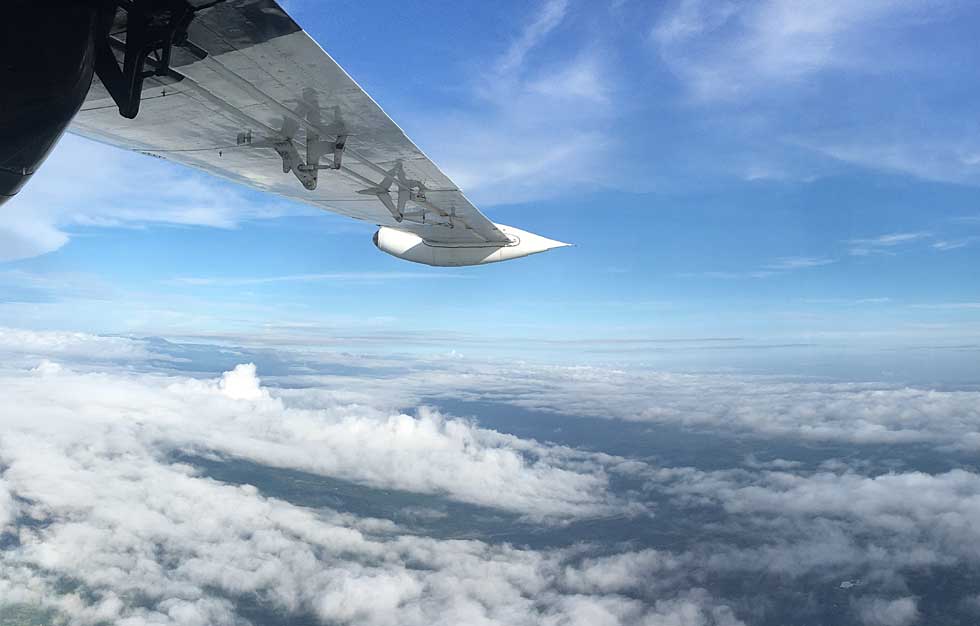 After our goodbyes here we again hopped onto the boat to cross the water leaving our Jurassic Wonderland behind (thankfully without the dinosaurs!) The trip across the bay was stunning, the waters were smooth and reflective against the blue skies. On arrival at the airstrip at Puerto Jimenez we learnt that the plane coming to collect us managed to get a flat tyre meaning we had an hour delay. We took this opportunity to walk back to the coast and look across the gulf from the opposite side to where we stayed. It was such a clear day. We gathered some refreshments and chilled. However, once we turned to our left it suddenly looked gloomy towards the North and dark clouds looked like they were heading our way so I suggested we should make our way back. As we approached the airfield again (only slightly more commercial than Tortuguero) the rain came down monsoon style. It echoed through the tin roof. Again the staff here had many job roles under their title and the same guy who checked us in then became baggage control and hastily attempted to waterproof everything to transfer our bags safely to the plane.

Once our plane arrived and we boarded, our flight had a quick stop over in Goldifo (back across the bay) to collect more passengers on route to San Jose. Due to the fact we had an hours delay we weren’t sure what was going to happen to our transfer at the other end, but sure enough there was a private taxi with our name on it casually waiting to collect us. It took about an hour as we rose higher into the mountains and along windy roads whilst nightfall began. Men casually wondered the streets where traffic was queuing to sell sweet plantain crisps to the peckish drivers. Our driver bought a bag and shared them with us. On route, we noticed many trucks were using the Pan-American Highway being the main route through Costa Rica from North to South America. We arrived at Chayote Lodge for our last night and you could tell instantly the air was cooler. We arrived in darkness but we could see lights sparkling all around in the distance, but we did not know where we were. It was exciting to know we would wake up to a new view in the morning. 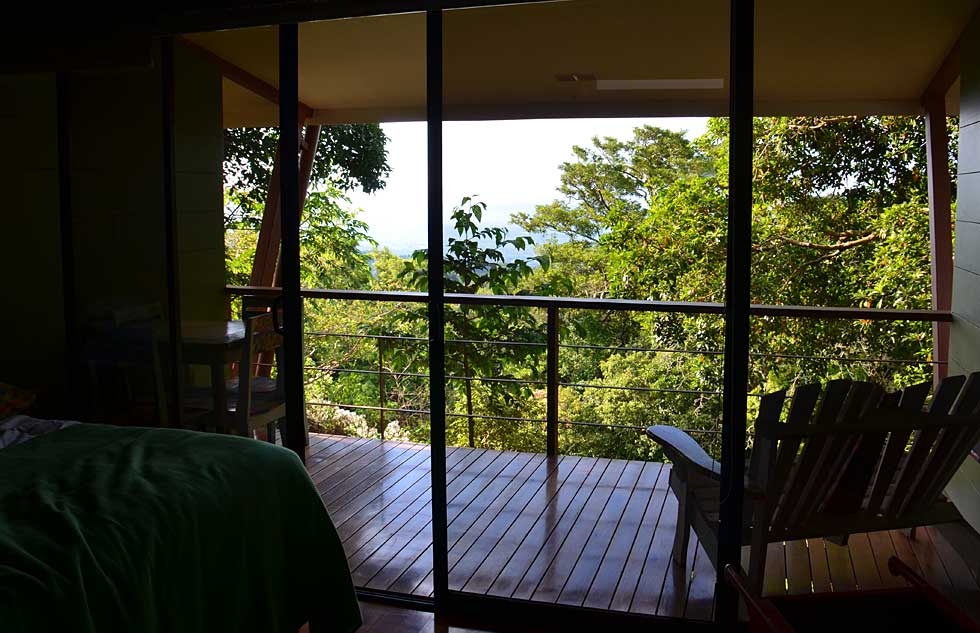 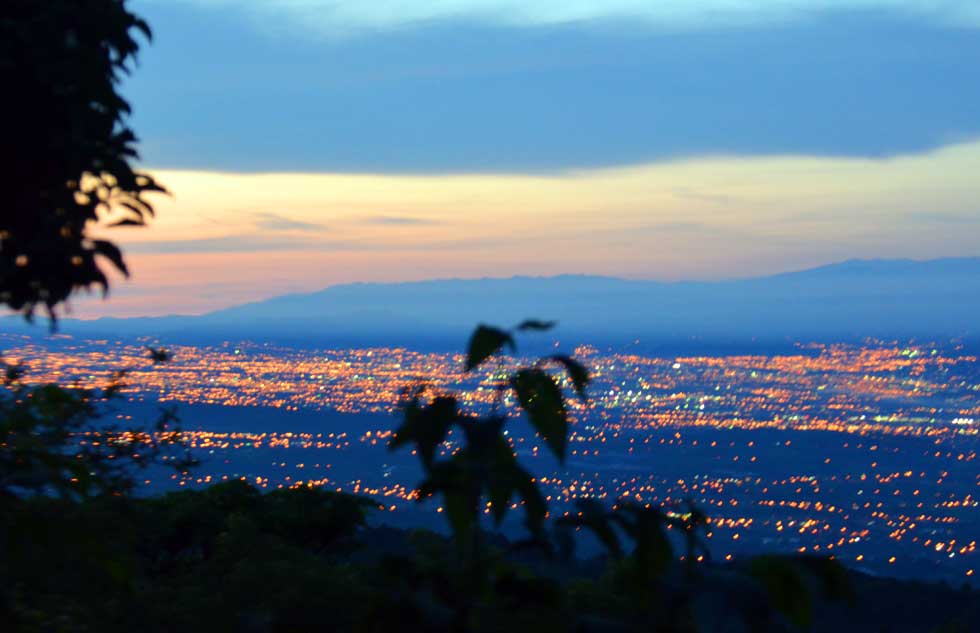 “I lifted the blind to be greeted with a stunning sunrise…” 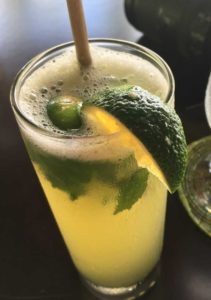 We enjoyed a pleasant meal in the restaurant and was joined by the owners dog aptly named ‘Chayote’. We were amongst a remarkable complex of lodges and main building surrounded by coffee plantations. They cleverly followed the theme of coffee throughout. The lodges even resembled coffee houses where they separate the beans once picked. The woodwork in the lodges even down to the toilet roll holder had been constructed using coffee plant wood. An extra service of coffee before breakfast brought to you in your own lodge topped everything. This is Coffee Lovers Paradise!

We met the owner after pudding and I scheduled a bird watching walk for the morning and then we retired to bed. We noticed above everything that here we had duvets. Not sheets. The air certainly was cooler therefore we must be high, especially as we knew coffee is supposed to be reared nearly 2000 feet above sea level. 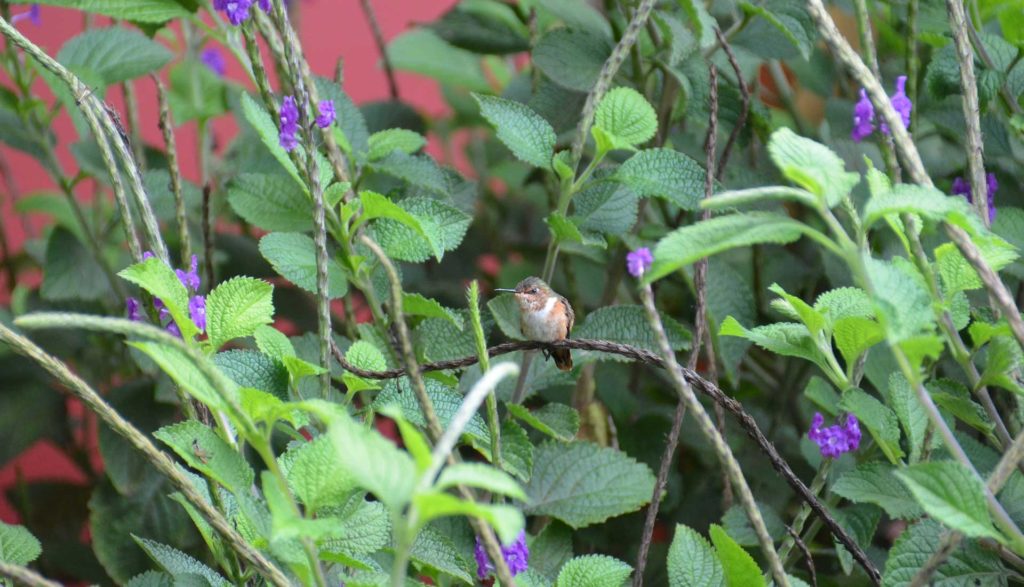 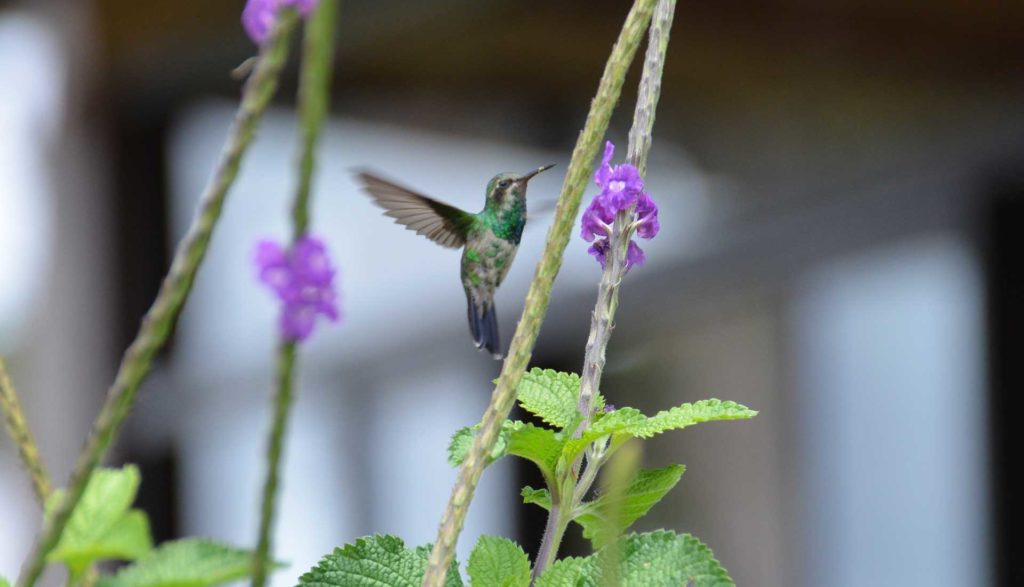 Dawn broke and we were startled by falling avocados and a new bird which sounded a little like the seagull trying to sing in The Little Mermaid. I lifted the blind to be greeted with a stunning sunrise.. and we had a balcony. I grabbed my camera and out I went. You could see for miles. What a stunning location! We were up high on a mountain and had views across the mountainous central valley near San Jose where in the distance you could see views of Poas, Barva, and Irazu volcanoes! To our far left there was even one erupting! The light was perfect and the hues of blue were magnificent. You could see deep into the valley – where all the lights had been sparkling. The colours were just outstanding – blues and greens and just so much to distract you from everything. It was the perfect way to wake up and start the day. Feeling totally refreshed and enlightened. After sunrise I managed to tear myself away and off we went for breakfast. My guide had arrived early but was happy to wait for me but just then before my last mouthful he called out… TOUCAN! I was up. I had been anxious all week to see this particular toucan – the Keel Billed Toucan, and there it was. Bobbing in the trees above me. We had managed to find two other species of Toucan during the week, but this was my gem in the rock. I took a few snaps and then enjoyed watching its elegant dance. With a beak so big and awkward you would think they would be top heavy but he swung about high in the treetops like a gymnast. Poised, balanced, magical. Our tour had certainly begun! 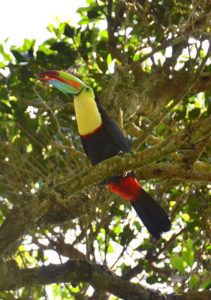 “With a beak so big and awkward you would think they would be top heavy but he swung about high in the treetops like a gymnast.”

We continued on our walk and discovered a few more birds: Steely vented Hummingbirds, Scintillant Hummingbirds, Cavinet’s Hummingbirds, Green Violet Eared Hummingbirds, Rofous Collared Sparrow, Tropical Kingbird, House Wren, Turkey Vultures, White Tipped Doves, Blue Crowned Motmot and last but not least; the national bird of Costa Rica – the Clay Coloured Thrush. Not as vibrant as its counterparts but equally as magnificent. Three hours passed and we wondered through forests and farmland and headed through the plantations back to Chayote. My guide was a plant and tree specialist and had a brilliant sense of humour (who even caught me out by whistling bird song pretending some rare exotic birds were on our fingertips!) – He was one of a kind! Before we arrived back he gathered leaves and fruit and we tasted/smelt them all. So many aromas. A small green fruit which looked like a tangerine once peeled was offered to me to try – I tried just one slice and what a rookie mistake I made! It was the sourest thing I have ever tasted. A cross between a lemon and lime and seriously powerful! When we arrived back I thanked him and told him to never stop laughing!

There was still so much on my mind, so much to take in, so many new amazing memories and stories to share. Costa Rica is incredible. They don’t use the the saying ‘Pura Vida’ for no reason – it really is Pure Life through and through. The people, the passion, the strive for a healthy environment, to live in harmony and co-exist with nature. To protect all who share the land space and complement each other with a happy medium. So much flourishes here and it makes perfect sense – everything is so well considered and all who inhabit here – people or animals – know it.

Read the next instalment of Felicity’s Costa Rica adventure.

Travels as a father

With Father's Day this Sunday, June 16, I asked that seasoned traveller, Tribes' Director Guy Marks, about his experiences of seeing the world through the eyes of his sons.

My first night on a ‘posh’ safari

My last safari experience in Tanzania was 10 years ago, when I was that bit younger and a bit more gung ho! We stayed in dome tents in sleeping bags in public campsites, and loved the experience of hearing zebra munching grass outside as we slept (or at least tried to!).