Are you feeling lucky?... - Tribes
Back
Travellers' Tales

…said Jane, as we climbed aboard the Land Rover with Peter, our safari guide and Ali, our driver. After a moment’s thought, Peter replied, “Yes!” We knew that he knew what we meant.

We were on the last full day of our safari at Lake Manze camp.  On the first day during our drive from the airstrip at Siwandu, Peter had asked everyone what we most wanted to see on the game drives.  Various animal and bird names were called out, and when it was my turn I said, “Wildebeest and warthogs…”, “You’re easy to please”, said someone in the next seat, (we had already seen these funny looking creatures a few minutes before,) “…but most of all I must see a leopard.”

Unfazed, Peter said he would do his best, although he admitted later that he had caught only two glimpses of this shy and elusive creature since the camp opened on 23rd May – two months earlier.

So after going out in the Land Rover at all possible times – early morning with breakfast in the bush, late morning before lunch, late afternoon before it got dark, interspersed with boat safaris on the lake and in the channel, we were on our final game drive.  It was just the two of us, with Peter and Ali, and the closest we had come to spotting (intended) leopard was when we chased after another Land Rover party that had called over the radio that they had seen one walking in the distance.  Hopes ran high, but not for long.  By the time we had arrived a few minutes later the cat had disappeared into the bush.  It had been too far away, apparently, to get any photos.  Even this ephemeral promise of a sighting caused Envy to stir in my heart.  Jane was beside herself… “No, of course you’re not competitive at all, Love” I said in an attempt to pacify her, but my insincerity was as clear as my own disappointment.

On this last day we drove to an area of the Selous that we had not seen before, and it seemed to be devoid of interesting fauna.  There were the ubiquitous impala of course, but we had taken dozens of photos of them in the first hour of arriving in Tanzania and now considered them passé.  Herds of wildebeest sweeping majestically across the plain – seen it.  The odd lone buffalo, sadly awaiting predation – another one.  Then Ali braked gently and pointed out a hyena and her cub lying in the shade beneath a tree.  At least this was something we hadn’t seen before.  A few photos later we set off again, with Ali looking left, right, and up; skilfully avoiding hitting anything in front without seeming to look where he was going at any point.  Suddenly, he brought the vehicle to an abrupt stop, and whispered “Chui.” 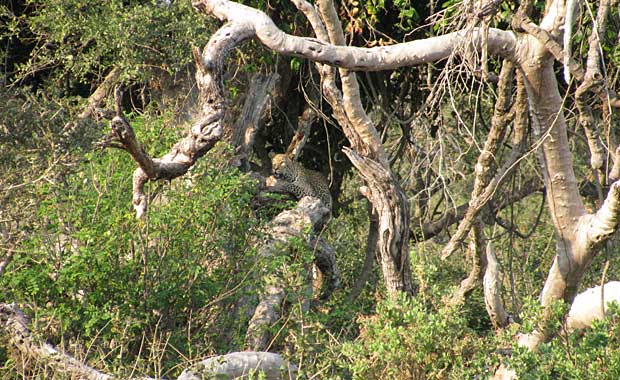 “There!” said Peter, pointing at a group of trees a stone’s throw away.  I could see nothing but foliage.  I brought the binoculars into play and slowly swept the area.  Only with the aid of the 10x40s was I able to pick out the superbly camouflaged animal that was lying on a branch licking clean a bone of its prey.  I pointed my camera in the general direction of the animal I had so wanted to see and pressed the shutter release a few times.  Even at maximum zoom I was unable to pick out the leopard from the background that it blended with so well.  Peter noticed that I had stopped using my camera and asked if there was anything wrong.  I explained that I wasn’t sure that I had captured the leopard at all as the screen on my five year old camera was so scratched.   He suggested that I give him my memory card and he put it in his camera, fired off a few shots that showed the beautiful creature in all its glory, and after the leopard disappeared higher up the tree he returned the card to me.

After a few minutes the cat reappeared, resplendent on another branch.  It turned and looked me in the eye.  In that moment we were connected.  I swear it was acknowledging my awe and appreciation.  The moment was over. It turned away and left our view for the last time.  Peter had grabbed the opportunity to take a couple more photos and as he reviewed them he said, “Look, it’s a male, you can see its balls.” True enough his masculinity could not be doubted. We laughed in the afterglow of that special moment.

Later that evening at the dinner table we did some serious bragging.  Someone who had just arrived at the camp that day asked if we had seen “the Big Five”.  I replied that I had seen everything that I had hoped to see.  “Ah,” he said, “but did you see a leopard?”  Well that set us going for the next twenty minutes, and no-one at the table was left in any doubt that we had seen a magnificent adult male and were delighted with the experience.  Pippa was concerned that we were raising the expectations of the other guests, but we were not to be silenced.  We may have noticed a glazed eye or two and a stifled yawn after a while, but this was our moment and we really didn’t care!

“HOW MUCH!” cried Jane when I told her later about tipping the guys.  “Worth every penny, darling,” I said, “worth every penny.”  Peter and Ali had indeed felt lucky and they had undeniably made our day.

Ever heard of Madikwe?

Probably not, although it’s one of South Africa’s largest and best game reserves, offering an authentic, game-rich safari experience at a very competitive price.

Night Walking in Mumbai People are on the streets: talking, sipping tea, weaving in and out of stalls selling sugar cane, nuts and chocolate.

Paradise on Earth - Days 4 to 8 - The Osa Peninsula Continuing from her last post, Felicity’s adventure continues … The airfield at Tortuguero was small.