Not just a load of hot air - Tribes
Back
Asia, Travellers' Tales

When you think about a holiday to India, what are the first thoughts that come to mind? The Taj Mahal? The hustle of the Delhi markets? Tigers? Well, we were no different. So when the opportunity to do a hot air balloon ride over the Indian countryside came up, we thought this would be an alternative excursion to add to our trip , little did we know it would turn out to be one of the most incredible and outstanding experiences. 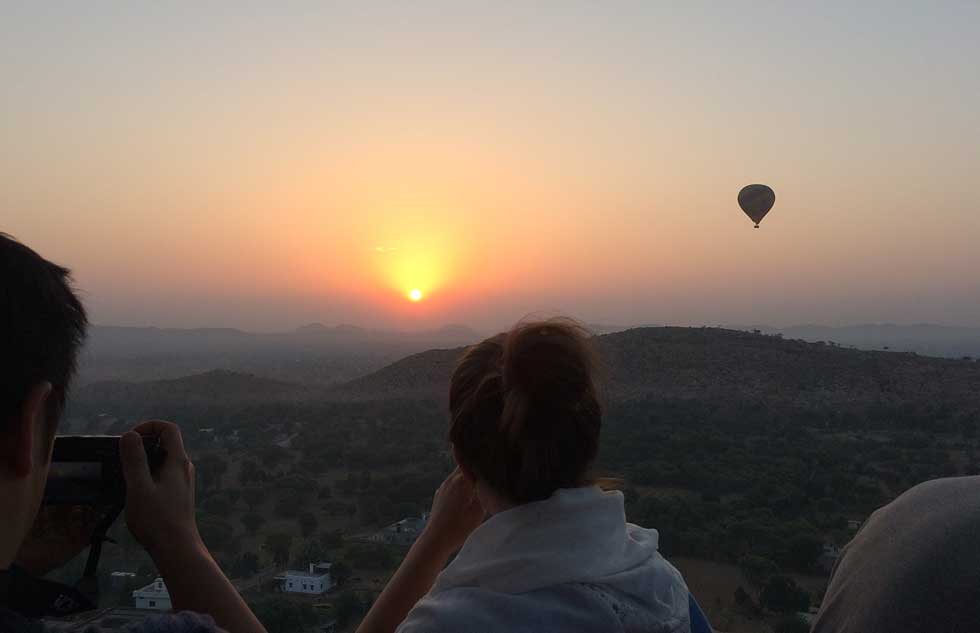 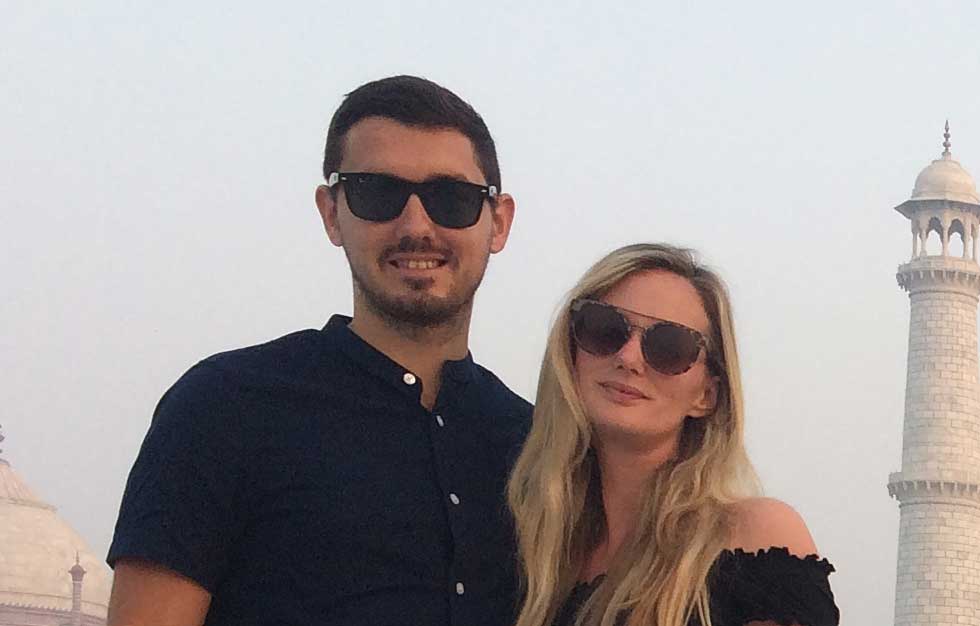 “Why are we up so early on our holiday.”

It was an early morning as we were picked up from our haveli in Jaipur at 04:15am. After the initial thoughts of “why are we up so early on our holiday” we soon realised that we were in for a very unique experience. We had arrived on the outskirts of the city and the sun was just rising. Our transport for the day was already fully inflated and ready to go. There was just enough time for a swift safety brief and a cup of tea (the essentials!) and we were ready to board our flight. 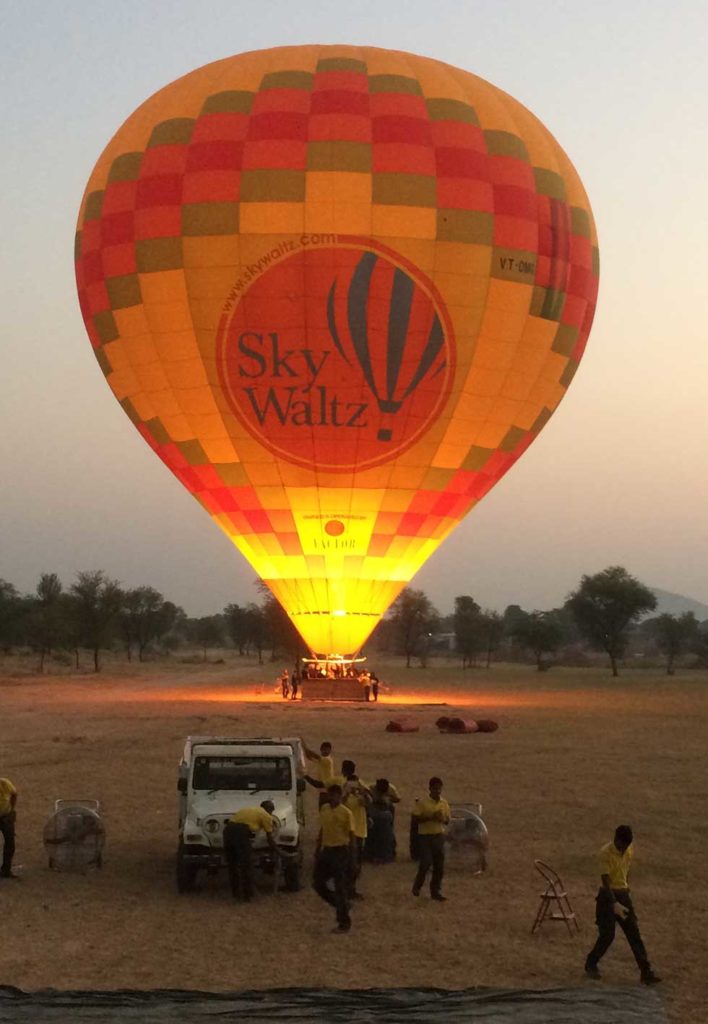 I had never done a hot air balloon ride before and am not that comfortable with heights, however our pilot for the day made everyone feel extremely relaxed and even made time for jokes on lift off. It was a this point that I hoped not everyone in the basket had estimated their weight on the waver form as I had done, and that they all had consumed a moderate breakfast that morning! In a matter of seconds we were off and away!

I guess the first thing I noticed, and what separates balloon flight from most other modes of transport, was the lack of engine noise. There was silence. We could only hear the sound of cattle below and the chatter of local villagers and they made their way to work or school that day. So quiet in fact that we often startled farmers who were busy working on their fields only to look up and see 16 western tourists in a hot air balloon floating about their heads! For some reason, both parties found this highly amusing.

The other surprise (amongst many) was the height in which we travelled at. I had preconceptions of being high above the clouds and needing binoculars to pick out sites and landmarks. This was not the case at all! As our pilot explained, the balloons are controlled very easily and we spent most of the trip at approximately 10 meters from the ground. This allowed us to brush across the tops of tall trees and even pass sweets to the village children below, an experience I will never forget. 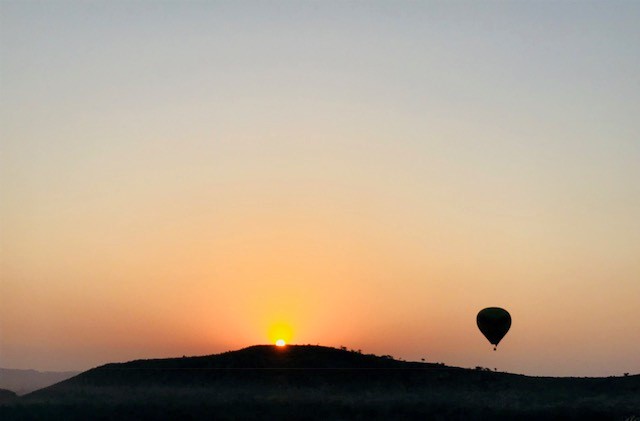 “This amazing experience is always first on the tip of my tongue when describing our time in India.” 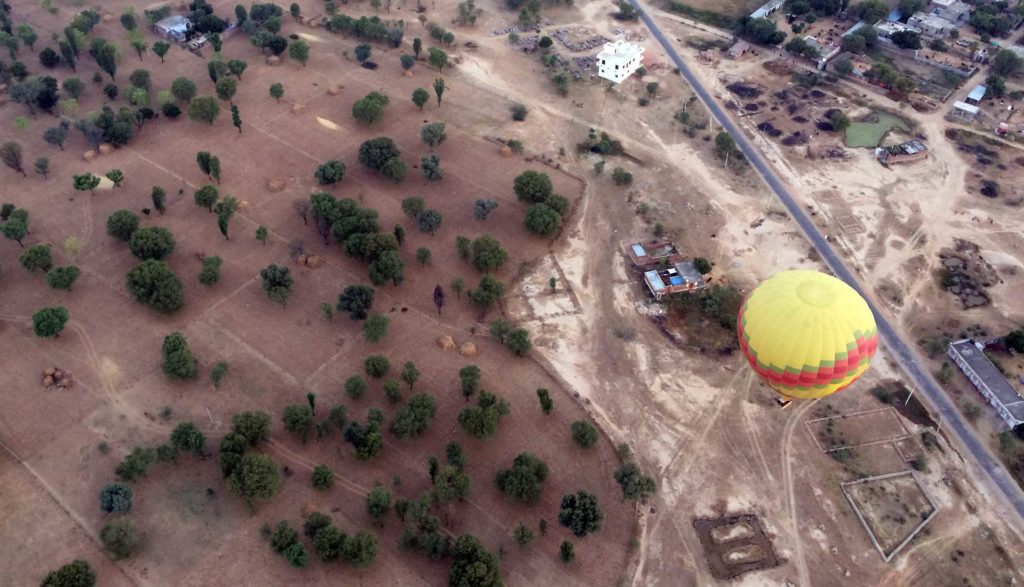 Although I mentioned the balloons are easily controlled, they do mostly rely on wind direction which is why the landing site can often be unplanned and improvised. Today would be no different. As we were all just getting used to our new surroundings the pilot announced that we would be landing in an open field nearby. The touchdown was smooth and was welcomed with a huge applause from 16 highly satisfied passengers.

It was at this point we realised we would not be alone for long, after all it’s not every day that a 30 foot, multi-coloured hot air balloon lands in your back garden and we were soon the talk of the……village. Lots of locals came out to greet us and we were humbled at how welcoming and friendly they all were. We had just enough time to take some photos and have a brief conversation with our new friends before we were picked up by our chasing transfer vehicle.

I had thought this balloon trip would be a story I would tell friends after I had explained the Taj Mahal visit, the tiger sightings and the bike ride through Old Delhi, instead this amazing experience is always first on the tip of my tongue when describing our time in India.

It’s rare that you come across anything on this earth that hasn’t also been thought of by someone else in a totally different region.