Many people have seen the famed river crossings of the annual wildebeest migration on programmes such as BBC wildlife and National Geographic, but what you might not know is how long the build up is before an actual crossing happens. It’s quite an amazing thing to witness.

On a recent visit to the Masai Mara I saw this build-up right from the beginning. We were on a game drive when our guide became a little distracted. He was watching what looked like a dust cloud in the distance but on closer inspection we learned this was one of the tail-end migration herds (approx 2000 strong) and they were heading toward a known crossing point (Paradise Crossing).

We arrived at the crossing point a little way ahead of the herds, anticipation growing with every minute. We watched the first animals head to the water’s edge, sniffing the air and water for danger. Looking nervous, they hovered for a while only to retreated up the banks as more of them poured down poured following suit. 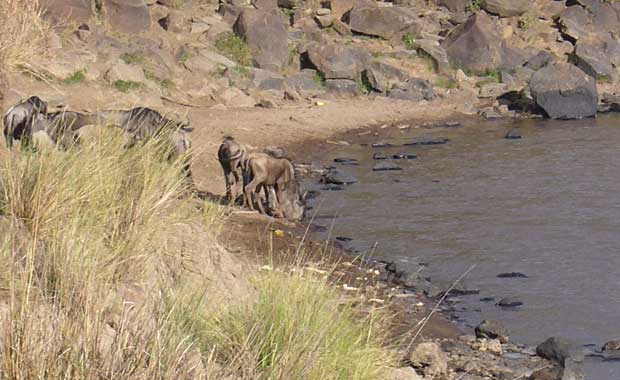 This is how it went on for almost an hour, with each new wave of animals increasing our anticipation. ‘All it takes is one’, our guide kept saying. Once the first animal crosses, the masses follow in what can only be described as pandemonium.

We spotted a croc in the middle of the river, with 2 more lying on the opposite bank. Now, I was very nervous, being torn between wanting to see one of the greatest wildlife events on the planet, but also not wanting to see just how brutal the crossings can be.

A few zebra were in the shallows with a tiny baby splashing around, completely oblivious to the eyes just under the surface, coming closer and closer. By now I was literally on the edge of my seat wanting to yell at the baby to run away, but also wishing the crossing would happen! 4 nails bitten and counting….!

Then, a couple of adolescent wildebeest came crashing into the water revealing the crocs position and then next thing we saw was a cloud of dust and mud as the herds bolted back up the banks and away from the river.

No crossing for us today! However, the anticipation, excitement and exhilarating spectacle we’d just watched was one of the best ‘almost’ wildlife experiences I’ve ever had!

I glanced at the odometer as I sped downhill on my bike this morning and saw that I’d reached the heady speed of 20mph.

Dragonflies and butterflies and the children of Matipwili

This trip to Tanzania was my first-ever visit to Africa, and I suppose I had all the usual preconceptions from watching a mixture of David Attenborough and Comic Relief.