Dragonflies and butterflies and the children of Matipwili

This trip to Tanzania was my first-ever visit to Africa, and I suppose I had all the usual preconceptions from watching a mixture of David Attenborough and Comic Relief. The reality proved very different (though happily there were plenty of David Attenborough moments), and even more special than I could have imagined.

Kisampa was the first stop on my tour, and I can’t think of a better place to begin a safari/coast trip to Tanzania, even though it’s not really safari and it’s definitely not coast! What it is, however, is something magical; something unique.

A trip in a 12-seater plane (on which we were the only passengers) brought us to Kisampa’s landing strip, which their team had cleared by hand that morning, doing a considerably better job with their scythes than many a local council employee in the UK does with a ride-on mower.

We were greeted by Richard Barbour, one of the founders of the camp, and Bori, the camp manager. Bags were swiftly loaded onto the open-sided Land Rover and we were off for my first experience of Tanzanian rural roads. ‘Roads’ is probably an ambitious description – incredibly rough dirt tracks through dense vegetation would be more accurate. But oh, what vegetation! The rainy season had not long ended, and the vehicle cut its way past lush greenery and eye-high grasses, and the mix of shades of green, textures of leaves and splashes of colour from hibiscus flowers was incredible.

My first sighting of an African animal was a primate – a black and white colobus monkey, who scampered across the tree tops when he saw us approach. But, if the furry wildlife was shy, the winged variety certainly wasn’t. The birdlife around here is glorious – within minutes of arriving we had seen various types of kingfisher, fish eagles and the stunning lilac-breasted roller.

Everywhere we went, clouds of butterflies danced around – like living confetti. White, yellow, blue – even black with white spots. And dragonflies, their iridescent wings catching the light, flickered past, adding another dimension to the aerial show. I hadn’t expected this, and it was stunning, and it has formed one of my enduring memories of Tanzania.

Kisampa is something of a baptism of fire to a ‘newbie’ as, an eco camp, it has no electricity or running water. But that just adds to the fun, with bucket showers taken under the stars using water heated on an open fire and smelling gently of smoke, and a rather posh-looking compost loo boasting a wonderful view (and the requisite privacy!).

Sleeping in open-sided, thatched bandas, with just the soft white mosquito nets to keep out any wildlife, was initially a little daunting to this first-timer. But the bandas are beautifully designed, with ingenious use of wood from trees which have come to the end of their natural life and been pressed into service as luggage racks, roof trusses etc. And, once I’d been told in advance that the shrieks of ‘Eek! Ha, ha, ha!’ that echo through the night were nothing more alarming than bushbabies, I relaxed and thoroughly enjoyed the whole experience; though the bushbaby that decided to yell right by my banda at 3am is NOT one of my most favourite furry friends! In the morning, we gazed across the misty valley as the mournful sound of the trumpeter hornbills – like a group of disappointed teenagers sighing en masse – echoed around us.

But my two most enduring memories of Kisampa will be the wonderful hospitality extended by Richard Barbour and his wife Jeanann (and how fantastic to hear a couple who’ve been married for over 50 years talk about the fact that they met when aged 18 and 15, and ‘have been best friends ever since’), and the work they are doing with the people of the nearby Matipwili village and other local communities.

All the camp staff come from the nearby villages, giving local people training and employment and setting them up for a career. But it goes way beyond that…

No visit to Kisampa is complete without a visit to Matipwili. The enormous respect and affection that the villagers have for Richard and Jeanann (‘Babu’ and ‘Bibi’) – and vice-versa – is heartwarming and thoroughly deserved. Over the years, their  Tuende Pamoja charity (translation: ‘Let’s move forward together’) has, with the support of Kisampa guests and other generous individuals, achieved a huge amount for this village and its inhabitants.

The big projects include sponsoring the secondary education of some 150 students, building two new classrooms at the local secondary school, providing a complete water system for the secondary school and medical clinic, completely renovating eight classrooms in the primary school, building a new village office and library in Matipwili (both in re-purposed shipping containers), and repainting and renovating the medical clinic.

The small projects are no less important. These include paying for a little girl with a severe squint to have an operation to correct it and enable her to see properly, providing funding for a man whose leg was severely damaged by a crocodile to receive a prosthesis and the money to start a business, funding an operation in Perth for a Matipwili man born with a cleft lip and palate, and providing daily medication for a student with epilepsy.

This is directly targeted aid, channeled to those who need it, and administered and overseen by people who live on site, and who know exactly what they are doing.

Visiting the village you are immediately aware that the people are still, by Western standards, poor. But the facilities this small village now has – largely thanks to Jeanann and Richard’s tremendous work – are fantastic. There are now 30 solar powered computers, sourced through the One Laptop Per Child scheme, and the children and adults of the village now have the opportunity to acquire invaluable skills that could make an enormous difference to their career prospects. 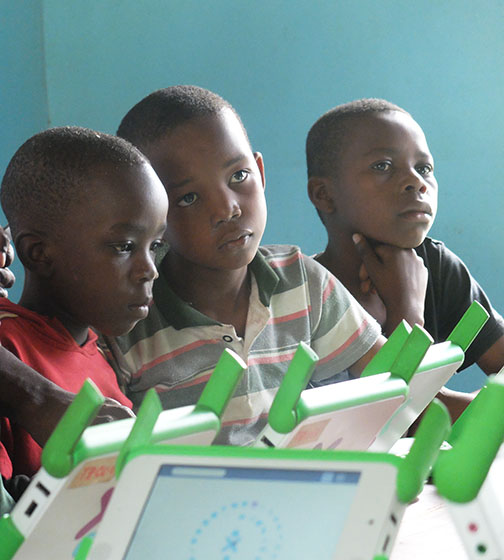 During our visit, the children were keen to show us their green and white laptops, and were also keen to pose for photographs and see themselves in the digital displays on the back of our cameras. The cry ‘picture, picture!’ went up frequently – and some of them have definitely perfected their poses! Jeanann had come equipped with footballs, rugby balls and skipping ropes, and these were eagerly claimed by their new owners – with one football being annexed for the ladies’ football team, which seemed a very good idea. And Goa, a lovely young Canadian who is volunteering at Kisampa at present, had bought with her a bottle of bubbles – which certainly intrigued the children! 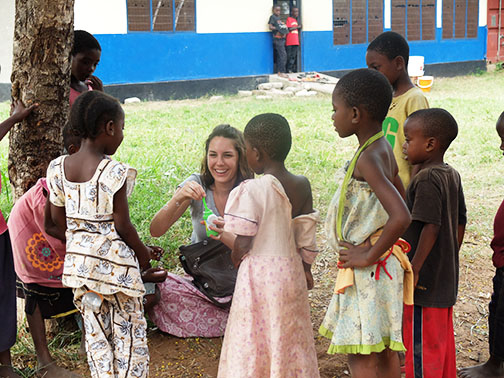 These children, and their parents, have a future – and that’s in no small way due to the work of Tuende Pamoja and the support of the guests at Kisampa. It was a privilege to be a part of this, even for just 24 hours.

The road to The Tides – and the elephant on the runway

If you’re travelling from Saadani to The Tides, and are offered the chance to make the journey by road rather than by the short trip by air, grab it! It’s about a two-hour drive and you see a fascinating slice of Tanzanian life en route as you travel along the wide, dirt road.

Rekero – A view to be reckoned with

This was our last full day in the Masai Mara  After 12 nights of staying in some incredible places in the national reserve and the various private conservancies, we’d become used to being spoilt in terms of our rooms, the food, and the views.