From our cosy beds, we listened to the roars all night. They seemed to be getting closer as dawn broke. Someone was definitely trying to make their presence felt. He had succeeded. We tentatively left our thatched cottages to walk the short distance to the main lodge for an early breakfast, and were relieved to see the night guards ready to accompany us in the half-light. 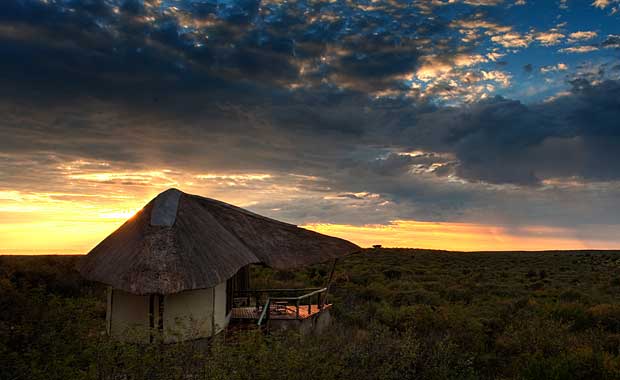 There was no doubt what we’d be doing this morning. Lion tracking!

From its position on an ancient sand dune, the camp at Tau Pan run by Kwando Safaris has an unparalleled view of the surrounding Kalahari landscape. There is no-one else within many miles of here, so we had the place to ourselves. 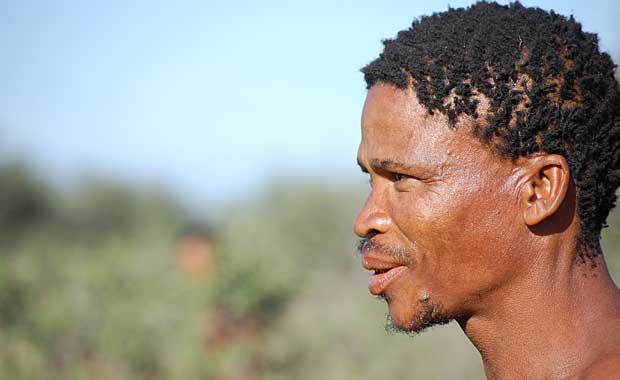 One of our guides was a San Bushmen, and yesterday we’d learned about some of the traditional skills employed by this tribe for living in the desert. Today we were shown exemplary tracking skills. The guides knew roughly where the roars had been coming from in the night, and quickly found tracks from earlier. We followed the prints of the big cat’s night-time walkabout.

At one point we came across a rare brown hyena who had evidently died in the night. Apparently he was an old boy. We were getting closer to the camp by now, and sure enough within a few hundred metres of Tau Pan, we found a lone male lion resting after his night’s efforts in calling his females to his side. They hadn’t arrived yet, but he had a confident air. They would come. 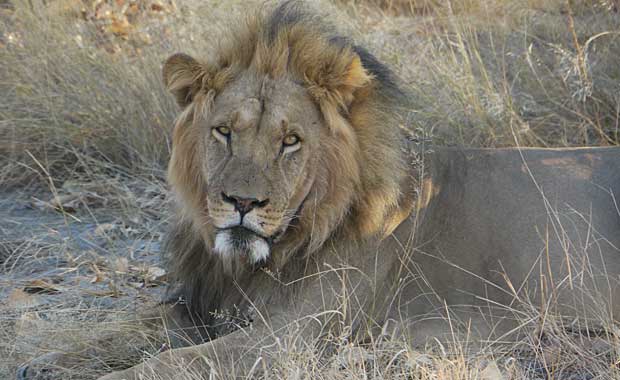 You don’t come to Tau Pan for prolific wildlife, but this vast expanse of wilderness is impressive in its own right. Combine this with a few wonderful wildlife sightings, a truly stunning lodge, and a chance to get to know something of the San Bushmen culture, and this is an unmissable experience.

Could you think of anything better than a G&T in hand, camera around your neck, the open Zambezi River ahead and the call of the African Fish Eagle? No, me neither! This was my magical sunset cruise experience on the mighty Zambezi River.

On the right tracks

There can be a romance in rail travel in foreign countries that’s hard to find in the 1105am from Ipswich to Liverpool Street.

There are four Governors camps in the Masai Mara We stayed at Little Governors, the only one on the west side of the Mara River, in the Mara Triangle.