One of the greatest wildlife spectacles in east Africa is the annual wildebeest migration.

The wildebeest herds are constantly searching for fresh grass after the rains, it is almost impossible to predict when and where the best places are to stay. Choosing a camp that is located in the right area at the right time of year will certainly increase your chances, but the best way to try and catch the herds is to stay in one of the Serengeti’s mobile camps – which move with the herds.

The migration begins after the short rainy season in early November. The wildebeest herds will start to arrive on the fresh grass plains of the Serengeti, around Lake Ndutu in the Ngorongoro conservation area. There are some good permanent camps in this region of the Serengeti like Ndutu Safari Lodge or Kusini Camp. 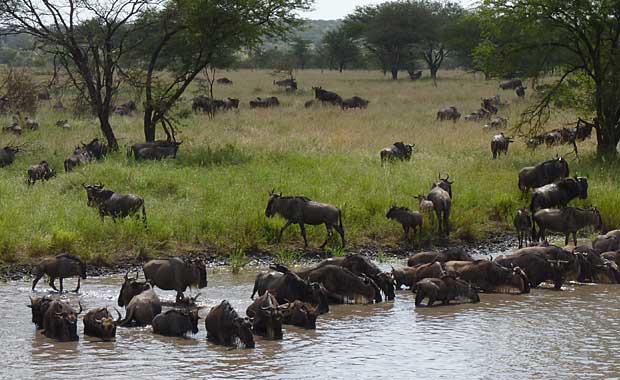 There are also a number of seasonal tented camps like Olakira Camp and Lemala Ndutu. These mobile camps move between the north and the south of the Serengeti following the herds during the migration.

From December to March the herds will spread out across the huge grass plains of the southern Serengeti. February the wildebeest calves are born, then from April to May/June the wildebeest migration moves north in the direction of the western corridor following the Mbalageti river and early herds may well have moved up to the Grumeti river. During this time there are Wildebeest herds spread across most of the western corridor and the heart of the Serengeti.

The following places that are we would recommend to stay during April through to July are grumeti-serengeti-tented-camp, Mbalageti Lodge and Kirawira tented camp for the Western corridor, whereas some herds will have pushed up as far as Migration camp in the Northern Lobo area. Sayari Camp normally has good herds and is the place to go towards the end of July onwards, but this depends on the rains. 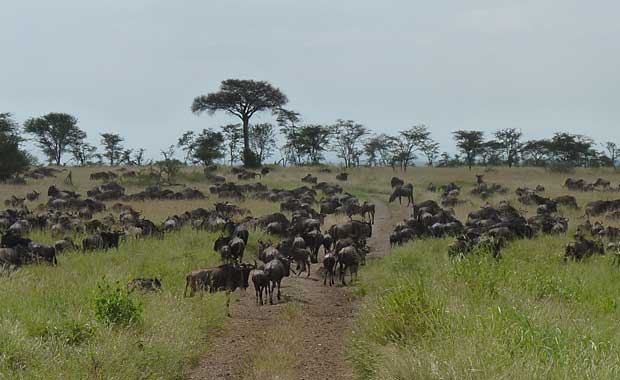 From August through to October the wildebeest herds are in the northern Serengeti and Kenya’s Masai Mara. There are a number of very good camps within the Masai Mara, where you can stay for the migration from late July onwards, including Governors’ Camp, Rekero Tented Camp, and Little Governors Camp are just a few in the northern region of the Masai Mara.

In late October and November the herds start their second ‘Great Migration’ south back towards the Ndutu plains where the rains will have rejuvenated the grasses. This is a fairly difficult time to catch the huge herds as they can move vast distances on a daily basis. By the beginning of December, Ndutu starts seeing the herds returning, and the whole process will start over again.

A Night in the Highlands

Dave spends a night in The Highlands, Asilia's extraordinary dome-tented camp at Ngorongoro in Tanzania.