Describe yourself in no more than 3 words.
Amiable

What real or fictitious tribe would you be a member of?
I’d probably be some kind of Silk Road merchant-adventurer.

How and when did the travel bug bite you?
The seeds were sown growing up in Hong Kong. Along with a pal, I set off one day for the ‘closed area’ (as it was then called) which ran alongside much of the New Territories’ border with China. Armed with a basic map, we first caught a train, then walked beyond a few hamlets up through a hillside cemetery and eventually gazed down across a small stream or canal at….forbidden China! It was very much a schoolboy lark but there was a definite sense of a journey coupled to ‘adventure’ and a mysterious place. A few years later I was InterRailing across Europe and met a couple of guys riding motorbikes to Kathmandu – I couldn’t join them but that encounter fed more ideas. So one small trip simply led to a six-month jaunt, and then another…..and so on.

Being a travel writer sounds like the perfect job.  Is it?
It is…and it isn’t! There’s no denying the travel is usually wonderful and I’m lucky to have the opportunity to visit such varied and unusual parts of the world. Yet to do it well does require real commitment and drive from the moment you start chasing assignments from editors to reaching your destination and, senses sharpened, sniffing out its quirks and oddities, nooks and crannies. It’s a job that certainly looks easier than it is – and being freelance is often a somewhat precarious existence. 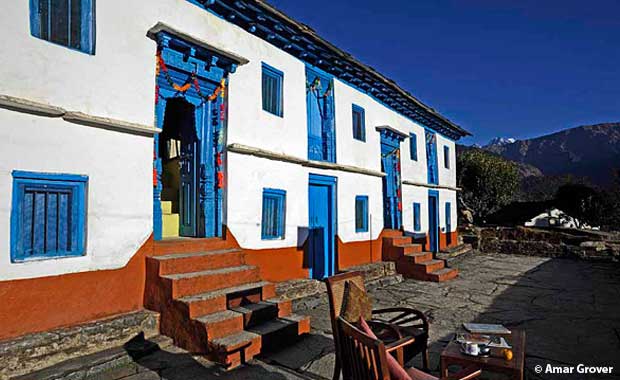 Which piece of your writing are you most proud of?
Recently I wrote about Village Ways’ (www.villageways.com) rural tourism project in Uttarakhand in the Indian Himalaya for the Financial Times. That piece – ‘At home in the Himalayas’ – featured in the top five entries for AITO’s Travel Writer of the Year 2013. A laudable project further publicised with well-regarded writing: now that’s a perfect fit.

Other than home, is there one place which keeps drawing you back?
I’m no mountaineer but the Himalayas keeping drawing me back. It’s not just the mountain peaks themselves but the fascinating life and culture in their valleys and villages, the stunning contrast between lush fields and plentiful orchards, and the beautiful yet harsh terrain beyond. The region’s colonial-era explorers had their work cut out for them and they left a rich and engaging seam of literature. I still find the whole region – from Pakistan through India and Nepal to Bhutan and the fringes of China – as captivating now as on my first ever visit back in 1987.

If you weren’t a travel writer, what would you be?
I’d probably be an operator arranging rather off-beat tours to India – there’d be quite a bit of walking and some great photography.

Describe the most poignant, funny or scary moment on your travels.
The most surreally scary moment on my travels occurred in Georgia (the former Soviet republic). I was up in Svaneti in the Caucasus Mountains, a region even most lowland Georgians regard with a mix of awe and caution for the Svans are, traditionally, a fairly wild and independent-minded bunch. Actually, they were all very kind to us but during my visit a Georgian TV crew and flown in by helicopter, possibly to make a documentary on the region and its distinctive tower houses. While sitting in our car nearby, the helicopter took off sluggishly and immediately drifted straight toward us. It felt like a slo-mo movie moment – as we froze, the craft kept coming, barely cleared our car’s roof and then flew off. Our driver winced and swore. I’ll never know if that pilot was careless, showing off and just incompetent.

What is the best piece of advice you’ve ever been given?
Nothing ventured, nothing gained.

Do you support a cause?
To be honest my sympathies and empathy have not (yet) evolved into a supported cause.

I had dinner last night at the Nepalese Embassy in London It’s in one of those fabulously grand buildings in Kensington Gardens.

This months interview is with Aaron Millar Describe yourself in no more than 3 words. What real or fictitious tribe would you be a member of? The beatnik writers of 1950’s, just because they were so free in their style and had something to say.

Night Walking in Mumbai People are on the streets: talking, sipping tea, weaving in and out of stalls selling sugar cane, nuts and chocolate.