This months interview is with Aaron Millar.

Describe yourself in no more than 3 words.
Not usually still.

What real or fictitious tribe would you be a member of?
The beatnik writers of 1950’s, just because they were so free in their style and had something to say.  They also drank a lot of whisky apparently, which would have been OK by me too.

How and when did the travel bug bite you?
At the turn of the millennium I spent 3 months travelling across Brazil with my best friend.  We were 22 years old, crazy and it’s a miracle we survived.  But, somewhere in between the parties of Bahia and the forests of Lencois, I fell in love with exploring the world.  For me it’s about connecting with that travelling state of mind, which – at its best – is open and fearless, and I think has the capacity to change us in surprising and positive ways.  It’s something I write a lot about on my blog The Blue Dot Perspective

Being a travel writer sounds like the perfect job. Is it?
If you don’t care about money or jet lag, it’s pretty close. Trying to capture the essence of a place, or experience, is a huge creative buzz.  But a challenge too. It demands that you be absolutely present in the moment and take in all the elements of the experience – the sounds, smells, the particular look in someone’s eyes – while at the same time piecing these things together, like a mosaic, and deciding which elements will best recreate those feelings and emotions in the mind of the reader.  But more then that still, writing about travel forces me to go outside of my comfort zone and seek new experiences and new kinds of people.  It’s the ultimate form of personal growth – without a workshop or self-help book in sight – just you and the world, and that’s why I love it.

Which piece of your writing are you most proud of?
The piece of writing I am most proud of from last year was a relatively small article for Positive News, a niche newspaper that reports on the people and initiatives that are helping to create a just and fulfilling world.  I love writing for them.  The article is about the remarkable Kogi Indians of Columbia: 20 years ago they came out of centuries of complete isolation to warn humanity that we are destroying the world.  We didn’t heed their warning, so they decided to team up with a BBC director to make a film, called Aluna, to try and get our attention again.  It hasn’t hit the mainstream yet, but I hope in 2014 everyone will get a chance to see it. The article was based on an interview with the director, Alan Ereira, about his experiences with them.

Other than home, is there one place which keeps drawing you back?
I like exploring new places, so tend to move around … this year I’m really excited to see more of the Americas, north and south. I’d also love to go back to Africa, there’s nothing comparable to the feeling of being close to animals in the wild.  I miss it, and my camera does too.

If you weren’t a travel writer, what would you be?
If I had the brains, I’d be an astrophysicist: Richard Feynman, one of the greatest minds of the last century, said that he felt sorry for people who don’t understand mathematics because they don’t know how beautiful the world really is.

If I had the talent, I’d be a musician: I think music is, perhaps, the ultimate form of creative expression on the planet.
But probably, and hopefully, I’d be working to promote sustainable tourism and/or environmental causes. And, no doubt, writing still – even if only in my journal, as I did for many, many years before getting paid to do it. 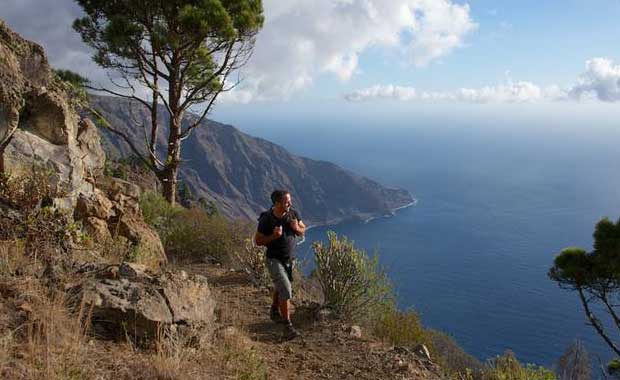 Describe the most poignant, funny or scary moment on your travels.
I have two recent poignant moments that changed the way I look at life, the world and everything: taking part in a Navajo Medicine Man ceremony and an interview with a Japanese Shugendo Monk. Although very different traditions, both believe in the power of the natural world to inspire, heal and enlighten people. And now, so do I.

What is the best piece of advice you’ve ever been given?
The people who are crazy enough to think they can change the world, are the ones who do. (Jack Kerouac)

Do you support a cause?
I’ve supported Greenpeace and Amnesty for a number of years.  But this year I plan to get more involved with Native American charities: their traditional beliefs and way of life is absolutely beautiful, but under threat from a dominant American ideology that isn’t doing nearly enough to protect, and preserve, the culture of its First People.

ABOUT AARON MILLER
Aaron Millar is a freelance journalist specialising in travel. His work has been seen in the Guardian, Financial Times, Independent and more.  He is also the travel editor of Positive News, the world’s leading positive newspaper, where authentic sustainable travel is promoted.  Aaron writes an interesting blog called thebluedotperspective.com, and he is also an accomplished photographer.
Darren Matthews - Author
Read more articles

Sitting round the campfire and swapping tales is one of the highlights of any safari While wildlife is inevitably the major focus of such a trip, a safari will usually also include other memorable events, such as encounters with local people, wonderful walks, amazing landscapes etc.

In the Tribe: Face-to-face with Marcus Rutherford

Artist and lawyer Marcus Rutherford has travelled with Tribes eight times since 2013 - and always to Tanzania.

The Secret of Great Travel Writing

Travelling is one of the great joys of life But those peak moments of discovery and exploration, when we are elevated from the routines of our everyday lives, are fleeting and, if we’re not careful, soon forgotten.