Back
Tribes’ client Patricia McKay experienced a glorious sunrise while travelling in Tanzania with us. And she describes it – and some of the other highlights of her trip – in the most beautiful way! 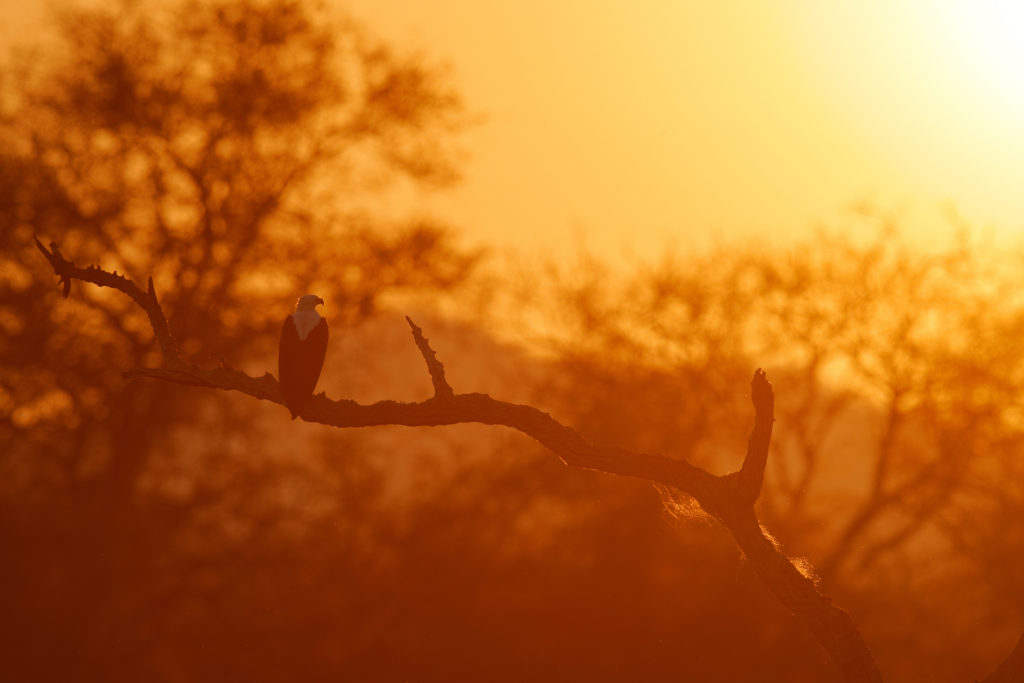 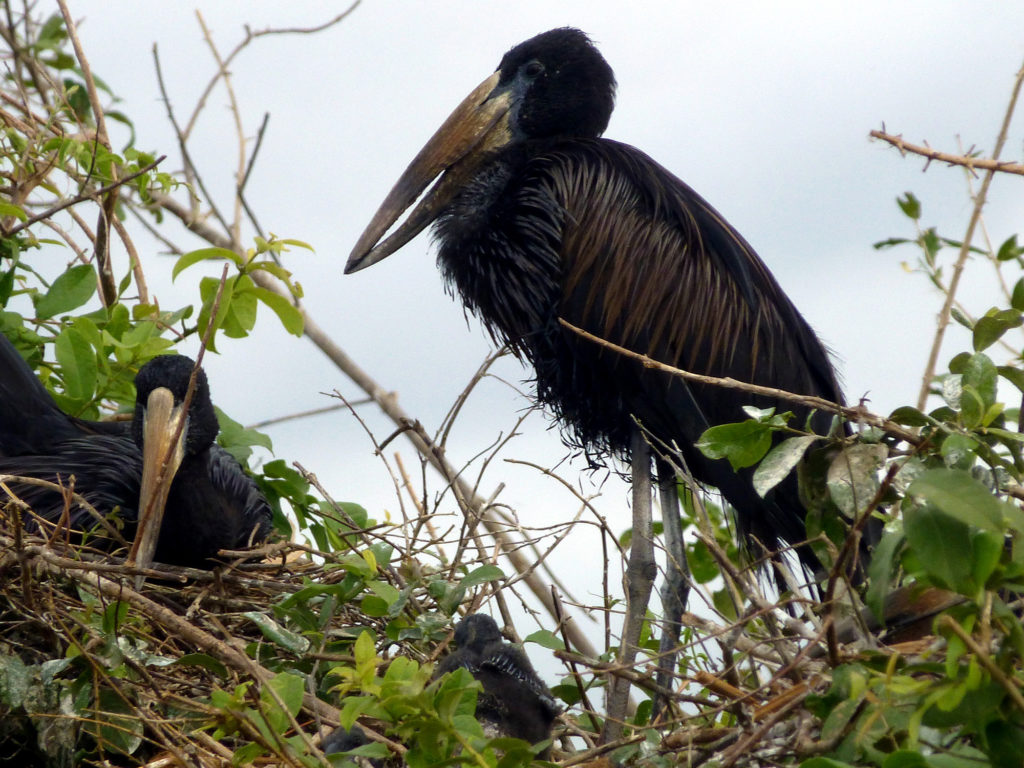 “The dawn creeps up upon you stealthily and almost imperceptibly at first.”

The dawn creeps up upon you stealthily and almost imperceptibly at first. Around 5:30am there is a just perceivable lightening which enables you to make out the shapes of the trees around the camp. The hippos are grunting to each other, some from the lake in front of the tent and others from the land behind it. The more musical grunting calls of the Southern ground hornbills can also be heard.

As the sky above Selous lightens other birds join in until there is a true dawn chorus of trills, twitters and cheeps, none of which I can identify. By 6 o’clock it is light enough to see a bit, and from the comfort of my bed I can observe two small birds in silhouette as they sit together side by side on a nearby palm frond. A couple of hornbills fly over, their shapes dark against the brightening sky. 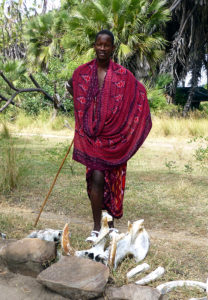 By 6:30am it is daylight, though the sun is not yet up. I can stand it no longer in bed, so I creep out and sit on our verandah. The first openbill stork of the day flies past, its perpetually open bill showing clearly against the sky. An African fish eagle flaps slowly past on its enormous dark wings, its dazzling white head and tail gleaming in the sun like beacons. In the sedges and rushes in front of the tent a cattle egret stalks past, looking for frogs or insects, or some other such tasty bite. The fish eagle flaps back again, this time carrying a large branch, which it takes to its nest in a palm tree, closely followed by its mate, who bears a similar burden. Out in the lake the hippos are just visible with their pink ears and noses glowing in the first rays of the sun. Every so often a smooth dark back appears above the surface of the water for a moment, only to sink back underwater a few seconds later. The grunting continues together with the odd snort and splash.

By now it is 7 o’clock, and my personal alarm clock goes off in the shape of a Masai warrior wrapped in the traditional red chequered blanket, complete with a wooden staff in one hand and a cell phone in the other, who strolls down the path to our tent to deliver my requested morning wake-up call.

“Hello, jambo – good morning” he calls out until I answer back with a smile and “Hello, good morning – assante!” “Karibou – you’re welcome,” he responds, and strolls off, his job done. It’s time for breakfast! 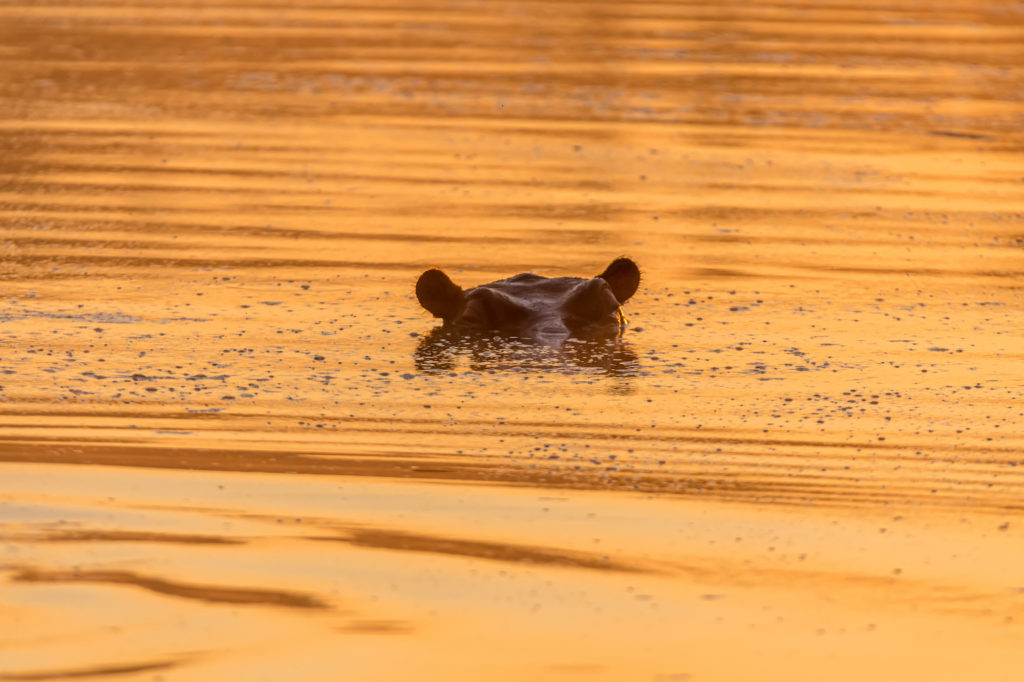 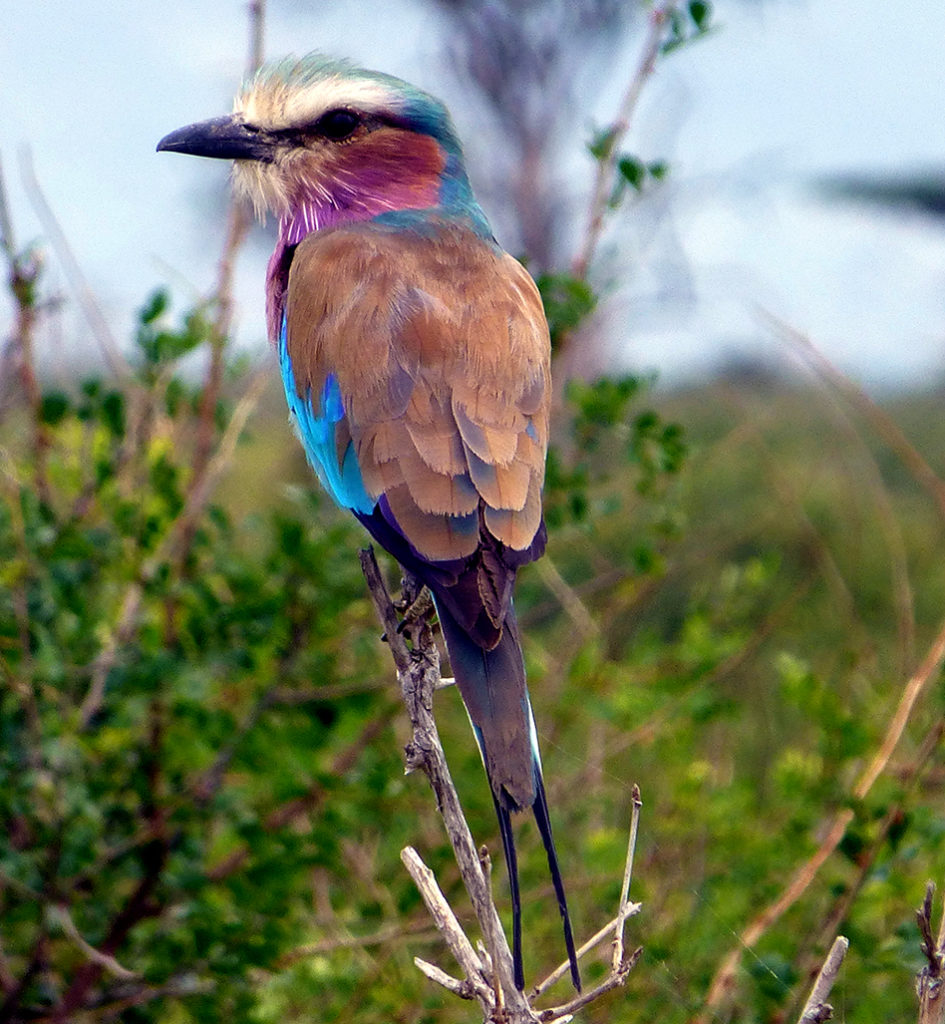 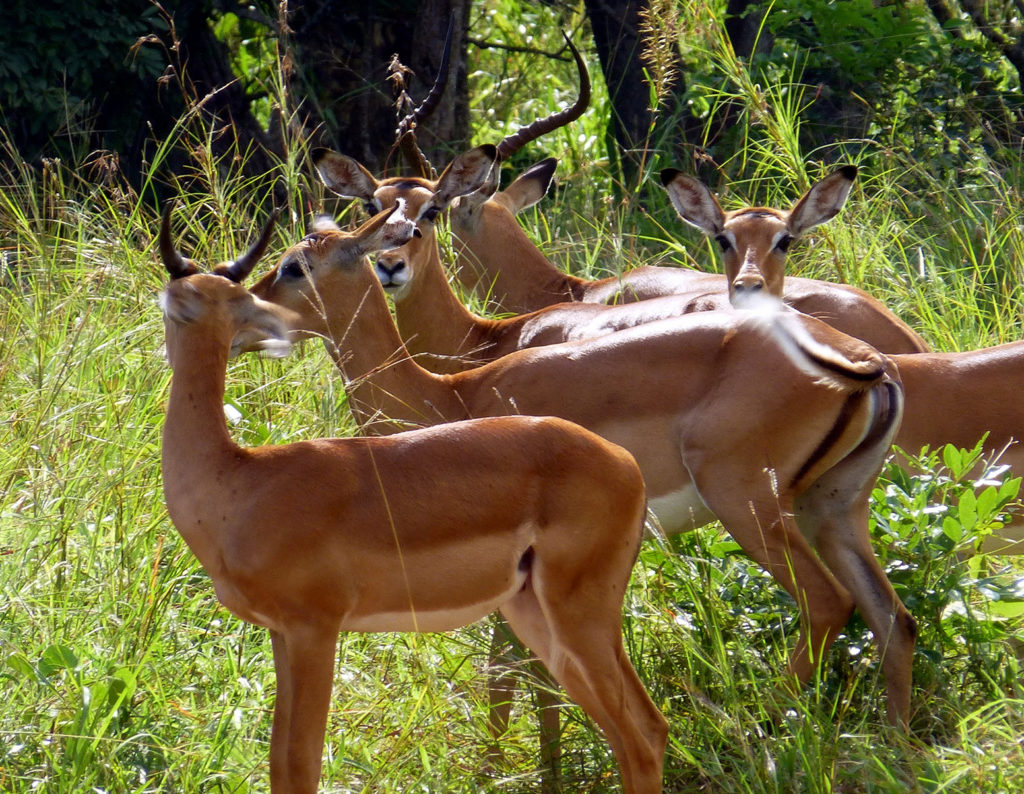 “…wonderful close looks at golden impala, gleaming in the sunshine.”

We flew from Dar es Salaam to Ruaha on a small plane which only had seats for 12 passengers, however on this particular flight we were only six in total – four passengers, and two pilots, who welcomed us personally as we boarded. The flight was short and soon we were landing on a dirt runway.

We met our guide Maulidi, and driver Godson,  and were soon on our way for our first game drive as we travelled to Mdonya Old River Camp. We had not even got out of the airstrip parking area before we saw our first animals – wonderful close looks at golden impala, gleaming in the sunshine. I had already told Maulidi that I was particularly interested in birds, and he immediately showed me some Fischer’s sparrow-larks, and the spectacular lilac-breasted roller, both of which were life birds for me. 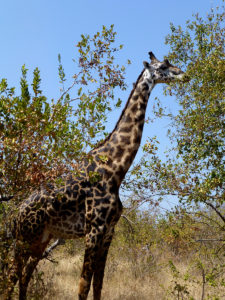 For the next hour I was held spellbound, as we looked at more and more birds and animals, until we rounded a corner, and suddenly, there he was! My first-ever wild giraffe, placidly grazing on an acacia tree.

We looked at each other for a minute or two, and then, having decided that we were harmless, he casually strolled away to the next bush with the curious stately gait that all giraffes have. It was a truly magic moment…

Breakfast with the baboons

One of my most memorable events was the bush breakfast that we had on our last morning in Ruaha.  The driver, Godson, pulled the jeep into a small clearing next to a very small pond.  The area was populated by many impalas as well as baboons.  The impalas immediately fled to the far side of the pond while the baboons examined us and then decided we were of no interest.  The very young baboons however carried on with their swinging from branch to branch, for which they were then reprimanded in no uncertain terms!  We enjoyed our breakfast watching all the animals interact.  And to our surprise and delight there was a hippopotamus relaxing in the water of the pond.  He/she graced us with a giant yawn and some grunting for having disturbed his/her early morning nap.  It was a lovely way to start the day and end our stay in Ruaha National Park. 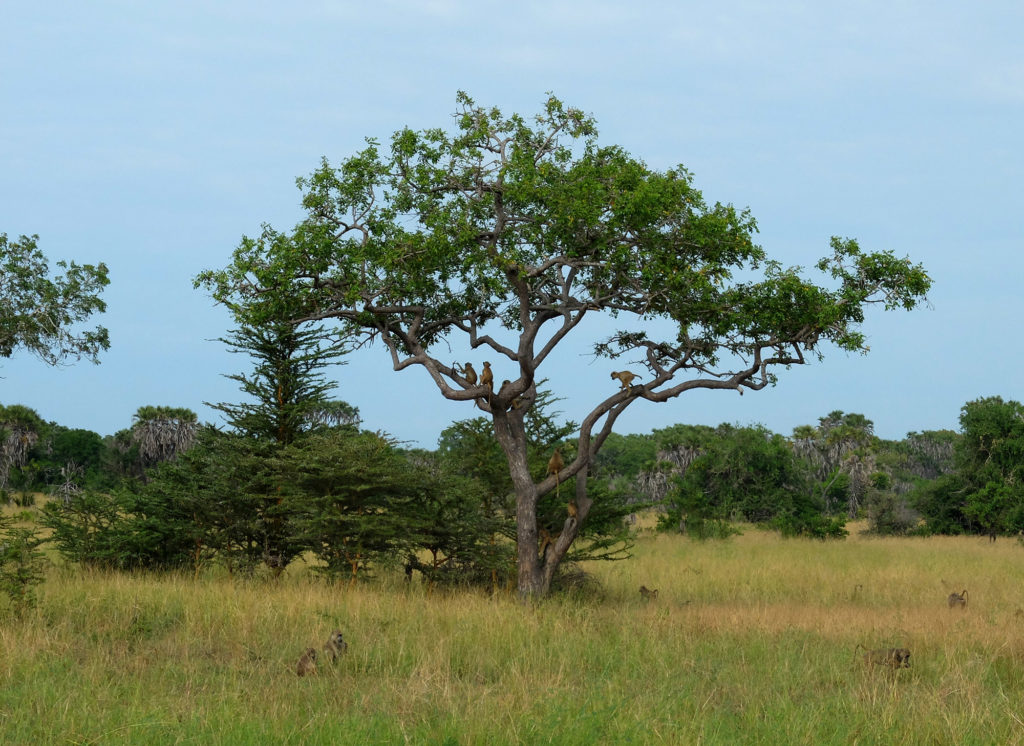 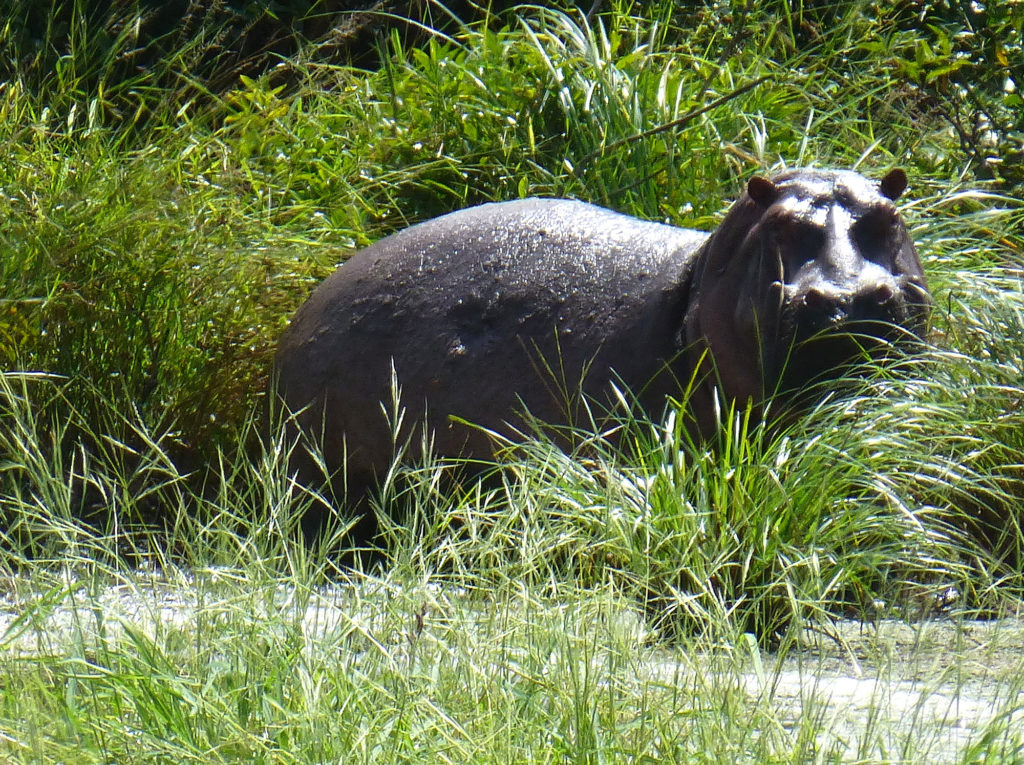 Except where all stated, all images are © Patricia McKay

Park fees paid and entry completed, it’s time to enter the park and visit the mighty Victoria Falls! An experienced guide gives a detailed account of the river’s geography, which is incredibly fascinating, and the colonial history of the Falls.