Best place to see jaguars in the wild

Jaguars are the largest cats in the Western hemisphere, the third biggest of the cats after tigers and lions, and can be found across a range of habitats in South and Central America. It is possible to encounter them when staying in rainforest lodges in Peru, Ecuador and Brazil; Manu Wildlife Centre in Peru is regarded as one of the best rainforest lodges for seeing jaguars, but the chance of seeing them in the rainforest is always slim.

Jaguars are usually very shy around humans, and are well camouflaged with their dark spots blending into the dappled shadows of the forest. If you are lucky you can sometimes see jaguars on the river banks when travelling along the Amazon and its tributaries, but they usually retreat back into the forest before you can get a good look.

The Pantanal of Brazil offers a much better chance of seeing jaguars, as the landscape here is much more open than the rainforest. The big cats can occasionally be seen in the grassland, but because they hunt cattle they suffer from illegal poaching from the ranchers and so tend to shy away from people.

By far the best place to see jaguars in the wild is on the Cuiaba River in the Northern Pantanal. At the end of a dirt road, a long drive from the nearest airport, the Cuiaba River is a remote spot that has attracted fishermen for year. Brazilians are keen sport fishers, and during the fishing season fishing boats use the Cuiaba River and its tributaries, paying scant attention to the jaguars that come to the river banks to hunt for their favorite prey, caiman and capybara. 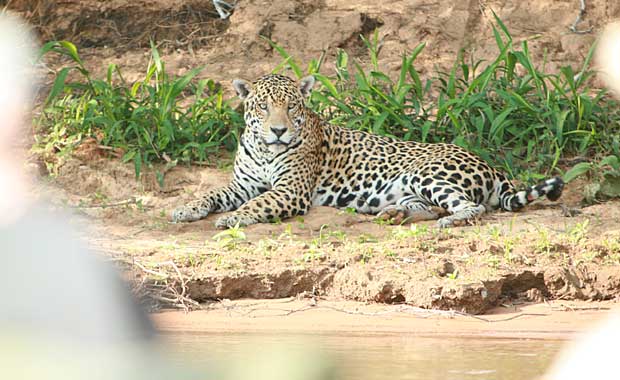 A generation of jaguars has grown up living close to the river, becoming used to seeing fishing boats pass them by without disturbing them, and they no longer flee the approach of boats as jaguars everywhere else in South America do.

Travelling in a small boat along the Cuiaba River with an experienced boatman and guide, it is possible to observe jaguars for long periods on the banks of the river, undisturbed by your presence. This is a unique experience; professional cameramen spend years trying to get a few minutes of footage of jaguars in the wild, but on the banks of the Cuiaba River you can watch them for hours at a time, seeing a range of natural behaviors such as hunting, playing with their cubs and even mating as well as their favourite pastime, sleeping.

The best time to see jaguars in the Pantanal is from July to October, but you can still see them in June and November. Although jaguars are one of the only cats that like swimming, they are sensible enough to retreat into the shelter of the forest when the rains start in December, and their territory is largely inaccessible until the floodwater recedes in May. There are several lodges close to the Cuiaba River, and even a floating hotel moored in the centre of the jaguar spotting area which have well trained boatmen and guides and offer an excellent chance of spotting jaguars. 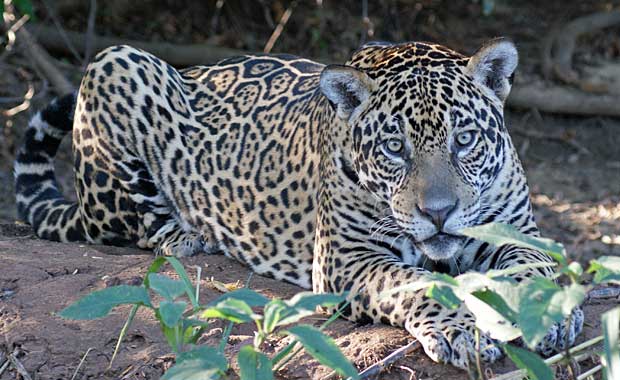 “I went to the Pantanal for a just limited time, and only had time for a couple of short trips to look for jaguars on the Cuiaba River, but I was rewarded with excellent sightings on both trips.

On my first trip, the jaguar was difficult to see at first, and I was amazed at the skill of my boatman finding him, struggling to make out the big cat hidden deep in the shadows under the trees away from the midday sun. I was in no hurry to leave, and waited and watched as the jaguar snoozed on the river bank in the shade.

My patience paid off, and after an hour or so, I was rewarded by a “catwalk”. The jaguar strolled down to the river bank for a drink of water, coming just a few metres from where I was sitting in my boat, offering me the chance to get some amazing photos and to see the muscles on the big cat working as he prowled up and down the bank before returning back to the shade to sleep, unconcerned that he was being watched and photographed throughout.” Paul Cook – Tribes Travel Co-ordinator for Brazil

Given that leopards are found in a wider variety of habitats than any other big cat, you'd think finding leopards should be easy.