Taking up a huge part of this land-locked country, Lake Malawi is of major importance to the country's population with many living on the shores and making a living from fishing. Part of the Great Rift Valley, Lake Malawi is flanked by hills inland towards the Nyika Plateau and has some attractive sandy beaches as well as interesting villages to explore.

It was previously known as Lake Nyasa from colonial times. David Livingstone was the first European to record visiting the lake in 1859 and Malawi (Nyasaland) was subsequently claimed by the British Protectorate shortly afterwards.

Sometimes known as the calendar lake, Lake Malawi is 365 miles long and 52 miles wide at the widest point. It is more like an ocean at windy times of the year with huge waves appearing during storms that make it hard to believe it's an inland lake, not an ocean! The waters mainly belong to Malawi and the borders with Tanzania and Mozambique are sometimes in dispute.

Home to hundreds of colourful freshwater fish including many endangered cichlid species, the lake is popular for diving and snorkelling, particularly around Likoma Island and in the south of the lake in the Lake Malawi National Park at Cape Maclear.

Getting around the lake for the local community and cargo (and some adventurous tourists!) is the Ilala, a huge boat which services the lake side villages from Monkey Bay in the south to Karonga in the north, including Likoma Island towards the Mozambique border.

A well-established small hotel on the western shores of Lake Malawi.

Makuzi Beach is a small lodge on the northern shores of Lake Malawi.

A small friendly beach lodge on the northern shores of Lake Malawi.

Nkwichi Lodge lies on the Mozambique shoreline of Lake Malawi and is a perfect getaway retreat.

Norman Carr Cottage is a small owner run lodge on the shores of Lake Malawi - a true 'home from home'. 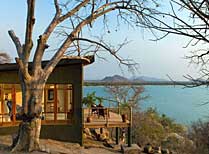 A modern resort on the southern shores of Lake Malawi set in landscaped gardens on a lovely beach.