Tadoba National Park is the largest national park in Maharashtra. Combined with Andhari Wildlife Sanctuary it forms Tadoba-Andhari Tiger Reserve, one of India's 'Project Tiger' reserves. The park is named after the tribal god 'Tadu', who, as legend has it, was killed here by a tiger.

It's an area of contrasting scenery with dense teak forests, wide valleys, meadows, lakes and hills. These habitats are home to a wide range of wildlife including leopards, sloth bears, guar, wild boar, sambar, marsh crocodile and, of course, tigers. Indeed, Tadoba is sometimes called the 'land of the tigers' due to the thriving population here. Tadoba Lake has a population of marsh crocodiles, once found across the state. Bird lovers will be impressed by the diversity of species which include honey buzzard, grey-headed fishing eagle, crested serpent eagle and paradise flycatcher.

You can explore by jeep, with morning and afternoon excursions, which are a good way to take in the varied landscapes and seek out animals. These can be combined with guided walks which let you get really close to nature. Other activities include boat trips, canoeing and cycling. It is one of the few parks that is open year round, so can be visited during the monsoon season when the wildlife is particularly active.

It's worth spending at least three or four days here to have time to get a feel for the park's flora and fauna. The varied scenery is a photographer's delight, as are the so-called ghost trees, unique to Tadoba. These are large and rendered distinctive by their white bark.

A small lodge with spacious suites and 10 acres of grounds just 300 metres from the entrance to Tadoba-Andhari Tiger Reserve. 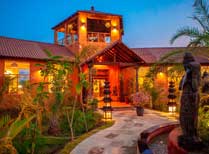