Pench National Park straddles the states of Madhya Pradesh and Maharastra and is named after the River Pench which flows through the park. The park is covered with rich teak forests with a few open vistas around the river. The beautifully forested gentle hills have a very different character from the dense sal forests of Kanha and Bandhavgarh. The infrastructure of the park is less developed than its neighbours with fewer lodges, and the park sees far fewer visitors than Kanha and Bandhavgarh.

The Park was named a Tiger Reserve in 1992, and the population of tigers inside the park has been growing rapidly since then. In recent years, several of the tigresses within the park have raised litters of 4 tigers to adulthood, something which is very common elsewhere. The most famous family was filmed for the BBC "Spy in the Jungle" programme in 2007, and I saw this family of tigers myself on a visit to the park in 2009.

Pench was once famous for its population of leopards and sloth bears. The rising numbers of tigers has reduced sightings of these creatures, but there is still a good chance of seeing them here. The park also supports large numbers of spotted deer, which can be seen in sizable herds along the Pench River, as well as many jackals and a good chance of seeing gaur (Indian bison), wild dogs and wolves. Pench is also great for birdwatchers, with a variety of species in the area in and around the park. 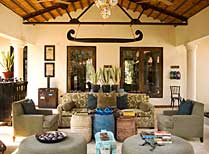 Baghvan is an enchanting lodge located a short drive from the entrance to Pench National Park with excellent service and guides.

Jamtara Wilderness is a lovely tented camp on the edge of a rural village within a couple of minutes of Pench National Park.

Pench Jungle Camp is a good mid-range lodge a short distance from Pench national park with a mixture of cottages, tents and rooms.

Stay in your very own treehouse surrounded by nature, look for tigers in Pench National Park and relax with a swim in the pool.