Kanha National Park is located in the heart of Central India in Madhya Pradesh and is one of the largest tiger reserves in the world. Along with Bandhavgarh is one of the best places to see tigers, making it the top spot for an Indian tiger safari. It's known as Kipling Country - not because you can get exceedingly good cakes here, but because this is where Rudyard Kipling's jungle book was conceived.
The Kanha Tiger Reserve consists of the National Park which forms the core, and a surrounding buffer consisting of a total area of 1945 sq kms. The vegetation is chiefly made up of sal forest, along with some Bamboo forests and grasslands. The sal forest is dense, vibrant and exceptionally beautiful. Parts of the Kanha Valley were declared a wildlife sanctuary back in 1933, but hunting continued, and it wasn't until the 1950s, that the area was proclaimed a national park. Animal numbers have recovered dramatically since then, and the park has expanded its protective buffer zone.
As well as the tigers Kanha boasts about 22 species of mammals which include leopard, hyena, wolf, jackal, fox, gaur (Indian bison), sambar deer, chital (spotted deer), nilgai (blue bull), sloth bear, wild boar, langur monkeys, and the barasingha (swamp deer) which has been rescued from near extinction. Kanha is also a fantastic location for birding with over 200 species recorded in the park.
If you are only going to see one park in India then Kanha is the one to go for. The numbers of animals, diversity and the stunning scenery combined with the very good chance of seeing a tiger make Kanha my top recommendation.
Read More

Situated on the banks of the Banjaar River, close to the quieter Mukki Gate entrance to Kanha National Park.

Flame of the Forest

A small lodge on the outskirts of Kanha National Park with just four luxurious cottages. Tiger spotting anyone?

Comfy accommodation in lovely forested grounds within one kilometre of Kanha National Park. 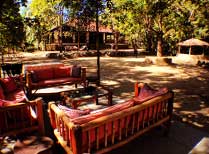 Shergarh is a very exclusive camp, situated at the quieter southern edge of Kanha National Park with excellent wildlife viewing.

Set in 22 acres of lush greenery, Tuli Tiger Resort is about 5 minutes from Kanha's main gate.