Why visit Makgadikgadi and Nxai Pans?

These are vast salt pans left over from a massive ancient lake. Most of the year the dry salt shimmers, but the rains (Nov-March) turn the pans into grasslands drawing thousands of zebras and other wildlife, plus predators. Come for unique landscapes, meerkats, to learn about the lives of San Bushmen, and an unusual wildlife migration.
The keys reason to come here are:

Also see our dedicated website all about Botswana: WWW.BOTSWANASPECIALISTS.CO.UK

When to go on safari to the Makgadikgadi and Nxai Pans

There are two seasons in the Pans ”“ wet (November to March) and dry (April to October). April is a bit of an ”˜inbetweeny’ month, as it’s hard to know when the rains will dry up.
In the wet season the pans are blanketed with lush new grasses so the wildlife is attracted here, and indeed there is a migration of about 20,000 zebras (and wildebeest, plus attendant predators) into this area, though in less of a mass than found in the Serengeti. So for wildlife viewing the wet season is usually the best.

However ”¦ if you want to see meerkats, the dry season is easier, and also as waterholes dry up there can be some drama between the game which makes for spectacular sightings. It’s also amazing to see this surreal landscape when the pans are dry and shimmering, and it’s great to sleep out on the pans too. The dry season (May to October) is also best for wildlife in the Makgadikgadi National Park and the Boteti River area.

Makgadikgadi and Nxai Pans: How to do it.

There are a few mobile safaris which come to the pans, but most people use one of the few lodges here on fly-in lodge safaris with Maun being the closest airport. It would be worth taking 3 nights to see what’s here. It combines well with any other area of Botswana as it’s such a contrast.

Accommodation in the Makgadikgadi and Nxai Pans

There are very few lodges in this area. In the Makgadikgadi, there are 4 lodges owned by the same luxury safari company ”“ Jack’s Camp, San Camp and Camp Kalahari are all excellent and expensive, whilst their Planet Baobab is a much cheaper option but further away from the pans.

In Nxai there is only 1 permanent, and very good, camp, Nxai Pan Camp. In the Boteti area there are two camps we really like too ”“ Meno a Kwena for friendly rustic but very good accommodation, and Leroo la Tau if you like things a little less ”˜barefoot’.

A traditional safari camp in the Kalahari, ideal for fun and families. 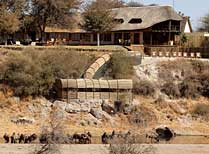 Leroo La Tau is set above a waterhole in the Makgadikgadi Pans with great views and superb game viewing.

A peaceful and rustic tented camp on banks of Boteti River at the edge of Makgadikgadi Pans.

A beautiful tented camp in complete wilderness in the Makgadikgadi area of Botswana.

Start planning your tailor-made holiday to Botswana. Tell us what you want, and we will tailor make your perfect trip.
Call: 01473 890499
PLAN MY TRIP

Overnight flights to Johannesburg then connections to Maun, total flying time about 13 hours.

There are no compulsory vaccinations, except yellow fever if you are coming from an infected area. Malaria prophylactics are recommended in the north.