The threat of global climate change on Aardvarks - Tribes
Back
Africa

KALAHARI, SOUTH AFRICA – Many species will not be able to evolve fast enough to adapt to the rapid rate of current climate change. Species with long life spans and long generation times, including most large mammals, simply don’t reproduce quickly enough to allow for adaptive traits to be selected. If they are to survive climate change, these species have to move to more suitable locations, or adapt their behaviour and physiology to cope with the changing environment. For many large mammals, especially those living in human-dominated and fragmented landscapes, moving to more suitable locations is not possible. So the animals will have to alter their physiology and behaviour if they are to survive, but we know little about their ability to do so.

One of the long-lived African mammals likely to be adversely affected by climate change is the charismatic aardvark. “Aardvarks can live for up to 25 years and reproduce very slowly,” said Astrid Parys, who has been in charge of aardvark care at the Frankfurt Zoo in Germany for many years. Also known as ant-bear, this enigmatic mammal is widely distributed throughout Africa south of the Sahara, but is noticeably absent from the hot and dry deserts. Aardvarks live solitary, secretive lives in underground burrows, emerging only under the cool cover of darkness to forage. 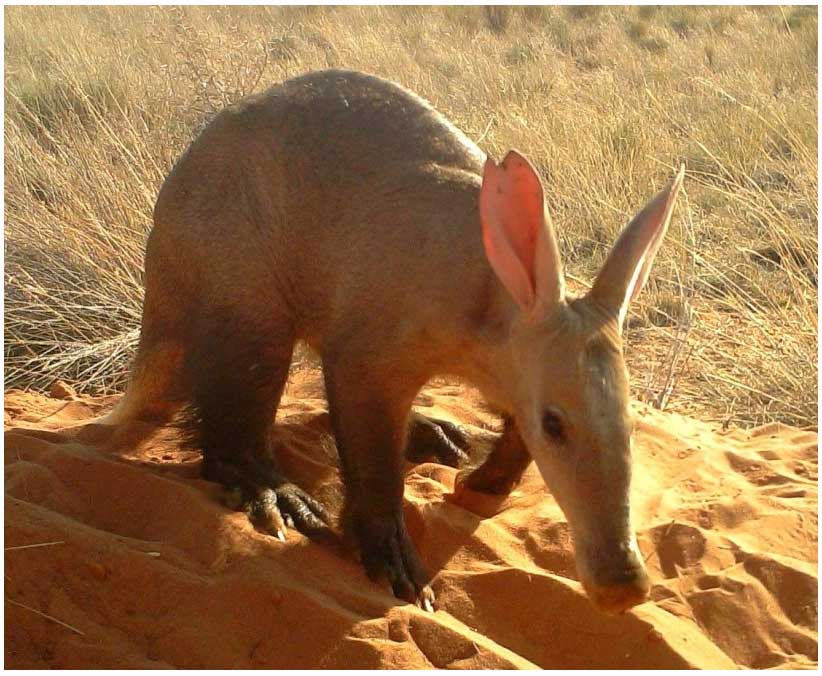 An aarvark at the burrow entrance on a sunny winter’s morning – a rare observation.

Aardvarks are very peculiar-looking animals, their face suggests a cross between a kangaroo and a piglet, with long ears, an elongated muzzle-like snout, and spectacularly long eye lashes. Walking on the tips of their toes, their back arches forming a characteristic curved shape. Their rounded back extends into a muscular, somewhat rat-like tail which they use as a counterweight when digging for food with their long, sharp claws and strong forelegs.

These strong forelegs and sharp claws allow aardvarks to dig burrows. Burrows provide shelter, refuge from extreme temperature fluctuations and protection from predators not only for the aardvarks themselves, but also for an array of other species. Aardvark burrows are co-used by almost 30 other vertebrate and numerous invertebrate species which cannot dig their own burrows. These co-inhabitants include the precious bat-eared fox, cheeky porcupine, elusive pangolin, as well as many birds such as the ant-eating chat and the endangered blue swallow. Several of these animals listed under threatened conservation status on the IUCN Red List of Threatened Species. As climate change takes effect and conditions become hotter and drier in Africa, these species are likely to become more dependent on aardvark burrows for refuge from extreme temperatures. Herein lies the problem. As ecosystem engineers, if the aardvark’s survival is threatened by climate change, so too is the persistence of its fellow burrow users. 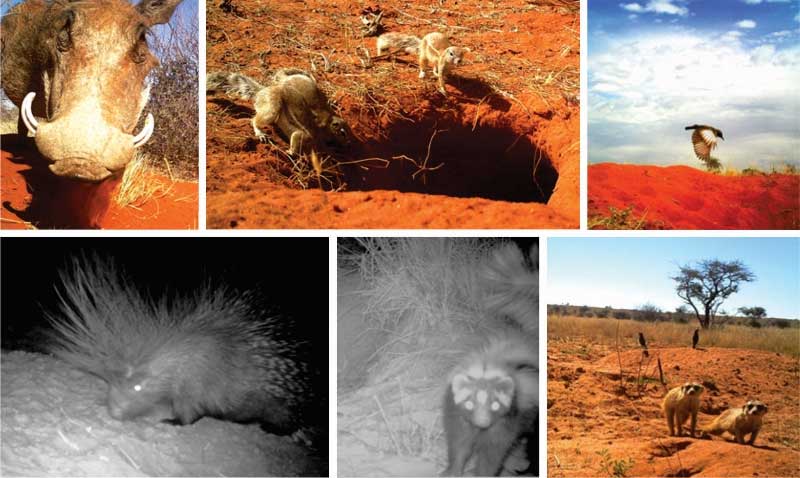 Co-users of aardvark burrows, captured on camera traps at aardvark burrow entrances. Top left to bottom right: three ground squirrely investigating the entrance to a burrow; two audacious meerkats inspecting a camera trap while ant-eating chats are watching over their entrance in the background; a surprised pole-cat; a dauntless warthog; a shy aardwolf timidly entering an aardvark’s burrow, a cheeky porcupine pondering about the taste of the camera trap, an ant-eating chat approaching its nest in an aardvark burrow’s entrance.

Co-users of aardvark burrows, captured on camera traps at aardvark burrow entrances. Top left to bottom right: three ground squirrely investigating the entrance to a burrow; two audacious meerkats inspecting a camera trap while ant-eating chats are watching over their entrance in the background; a surprised pole-cat; a dauntless warthog; a shy aardwolf timidly entering an aardvark’s burrow, a cheeky porcupine pondering about the taste of the camera trap, an ant-eating chat approaching its nest in an aardvark burrow’s entrance.

Covered only by sparse fur, aardvarks are not well insulated, and appear to be particularly sensitive to fluctuations in environmental temperature. At most times of year aardvarks avoid the heat of the day and only emerge after dark, when temperatures are cooler. However, when night-time temperatures become uncomfortably cold during winters, aardvarks shift their activity times earlier and leave their burrows in the late afternoon to avoid the frosty night air. Aardvarks need to spend substantial time above ground foraging for their prey, which have limited availability and low energy density. 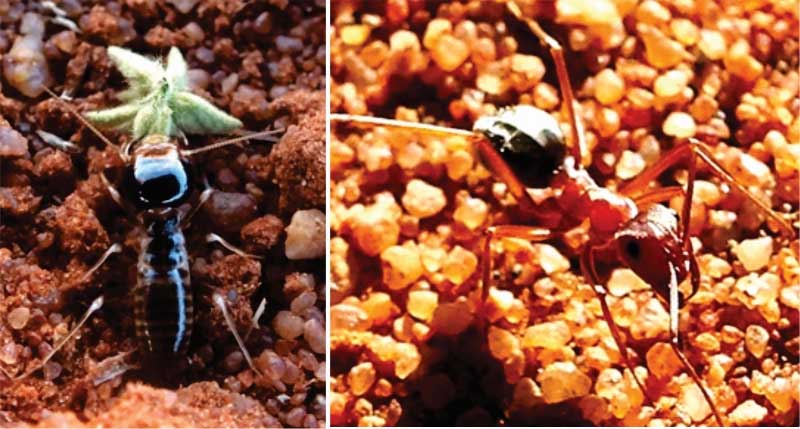 Main prey of the aardvark: harvester termite, collecting plant matter for storage in the hive (l.), and pugnacious ant, a vicious omnivore (r.).

Aardvarks in the Kalahari feed exclusively on ants and termites. The availability of ants and termites varies seasonally as a result of changes in temperature and rainfall. During summer, ants form nests just below the soil surface, making them easily accessible and thus the key prey item for aardvarks. Conversely, in winter or when conditions become very dry, ants retreat deep into their underground hive systems making them inaccessible to aardvarks. In most years, aardvarks can change their diet to focus on the termites which become active during the winter months.

Daytime foraging to avoid the cold of the winter nights.

“During a harsh year, however, if ants and termites are unable to hoard sufficient foodstuffs, their usually high productivity may decline, their population numbers will drop, and the aardvark may be faced with insufficient food resources,” suggests Prof Mike Picker, professor of entomology at the University of Cape Town.

Indeed, a large number of aardvarks died after a summer drought in the Kalahari in 2012/13. Benjamin Rey (a postdoctoral fellow) and Nora Weyer (a doctoral student), from the Brain Function Research Group of the University of the Witwatersrand in Johannesburg, observed several aardvarks in poor condition, looking emaciated and scruffy. They propose that the aardvarks were unable to access the ants which had moved deep underground during the drought. In an attempt to compensate for the lack of food, aardvarks extended their foraging times into the daylight hours, thereby exposing themselves to high environmental temperatures. As the Kalahari becomes hotter and drier with climate change, such harsh summers will become the norm and may have devastating consequences on the aardvark.

What does the future hold for the Kalahari?

“To successfully conserve the aardvark, and other species, through future climate change we need to better understand how free-living animals adapt their physiology and behaviour to cope with current variations in food, water and climate,” recommends Prof Andrea Fuller, professor of physiology and director of the Brain Function Research Group. She and her colleagues therefore initiated a project in 2012 to investigate the current thermoregulatory competencies and foraging activity of free-living aardvarks. Doctoral student Nora Weyer says: “Using VHF radio-tracking, I will be following aardvarks over two years. My focal aardvarks carry miniature sensors which record body temperature and locomotor activity. I am also characterising their diet and assessing the availability of prey. The data will elucidate how aardvarks adapt their physiology and behaviour to cope with seasonal variability in climate and resource availability in a hot and dry environment.”

The research is taking place at Tswalu Kalahari Reserve, a private game reserve located at the edge of the Kalahari Desert, which is also the edge of the aardvark’s geographical range. Tswalu Kalahari Reserve provides the ideal location at which to study possible adaptations of aardvarks to future climate change as it represents one of the hottest and driest environments currently inhabited by aardvarks, and may reflect the kind of harsh conditions expected throughout the rest of the aardvark’s range.

The main pillar of Tswalu Kalahari Reserve’s philosophy is to restore the Kalahari to its original state, and to best-possibly maintain and protect this sensitive habitat. Tswalu Kalahari Reserve strongly supports research on its property, and provides exceptional expertise from its management and conservation staff, as well as financial support through the Tswalu Foundation. This charitable foundation contributes to valuable wildlife research on Tswalu Kalahari Reserve, particularly on unique and vulnerable animal species such as secretary birds, African wild dogs, brown hyenas, pangolins and aardvarks.

left: a pangolin curled up into a ball for protection; centre: a majestic secretary bird perched on an acacia tree; right: an aardvark sniffing for prey underneath the sand surface on a winter day.

The Tswalu Foundation supports research and conservation of numerous animal species in the Kalahari.
Article and photos by Nora Weyer.

I arrived at Nairobi airport at 9 pm, tired and frazzled.

Tribes' client Patricia McKay experienced a glorious sunrise while travelling in Tanzania with us And she describes it - and some of the other highlights of her trip - in the most beautiful way! © Shutterstock – Ondrej Prosicky "The dawn creeps up upon you stealthily and almost imperceptibly at first.