We figured that a Golden Wedding Anniversary provided justification for a ‘special’ holiday and, anyway, the Galapagos Islands had been on our wish list for far too long.

Whilst in Ecuador, we really ought to visit the Amazonian jungle don’t you think?

Perhaps we won’t ever visit South America again, so how about adding Machu Picchu in Peru to the list?  Also Lake Titicaca – a homestay on an island – then we really must draw the line!

Shortly before we left, there was an amazing programme on television about The Giant Otters of the Amazon.  We were fascinated, but they had been filmed in Manu, Peru and that wasn’t where we were going!

“Is there any chance of seeing them at Napo?” we asked Paul of Tribes.

“Well, they have been seen” was his reply, which we took to mean that there was only a ‘snowball’s chance in hell’

We silently cursed and wondered whether we should have booked the Amazon experience in Peru, not Ecuador.

The Napo Wildlife Centre was everything that we expected of it and more.  Even the journey to get there was an experience.  Delphine our guide and his two canoe paddlers were from the local Quichuan indigenous community and were incredibly knowledgeable and interesting. 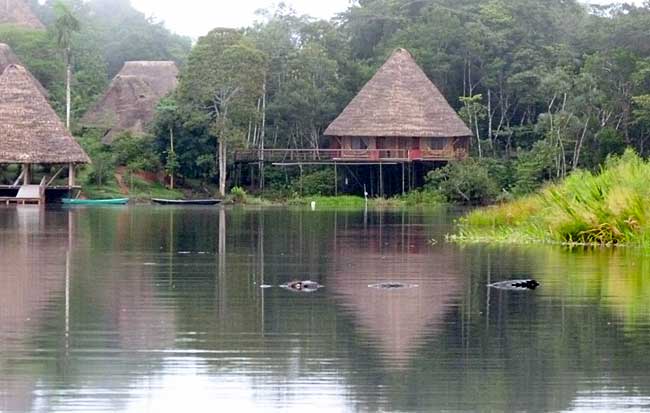 Returning from a parrot clay lick one day, canoeing down one of the black streams off the Rio Napo, Delphine suddenly signed us to be silent, strained his ears and then said the magic word “Otters!”  The adrenaline rushed, the paddlers paddled quicker and we started to see movement in the water hyacinths and heard grunting noises.  Then the bark of a cayman and more movement whilst the otters (a family of seven) argued with the cayman over territory.   We only saw them briefly before they made their way across land to safer territory.  But –wow – we had seen Giant Otters! 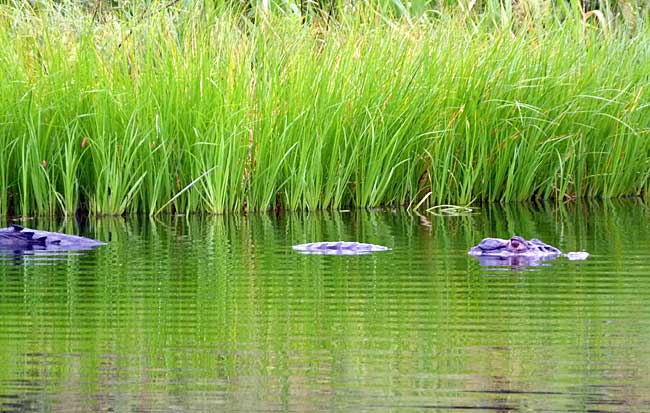 The next day, after our morning excursion by canoe, we were enjoying the chilled fruit smoothy served up on the jetty, when one of our paddlers said he could see the otters on the other side of the lake.  He fetched another paddler and we jumped into the canoe again for a completely unscheduled trip.

How lucky can you be?  There we were in the middle of this family of giant otters while they were diving for fish not fifteen metres away; young otters surfacing and gnawing at large silver fish held between their front paws whilst others tried to share the meal with them.  We must have been with them for at least twenty minutes while they were eating, playing and chatting to each other with their characteristic grunts.  It was an experience we will never forget and one which we felt very privileged to have witnessed as none of the other visitors at the Centre saw the giant otters during the week we were there.

So perhaps there are snowballs in hell after all.

Continuing from her last post We made our last transfer by private taxi back down the windy paths but this time in daylight.

When you think about a holiday to India, what are the first thoughts that come to mind? The Taj Mahal? The hustle of the Delhi markets? Tigers? Well, we were no different.

Tribes’ travellers journey to destinations that are home to hundreds of bird species and, even if you don’t start your trip as a birder, you may find you’ve become one by the end! The concept of a national bird is an interesting one.