Nestled into a dip in the landscape, the small 6-bedded Porini Mara camp feels like a secret hide-away that no-one else knows about.

I arrived at lunchtime. An Australian couple, David and Carol, were happily sipping white wine, awaiting other guests to join them at the table which had been set outside. It turned out that this was their third visit to the Porini Camps (Mara, Lion, Rhino and Amboseli camps).

“We wouldn’t go anywhere else,” they said. “Why would we? The camps are comfy, and in great spots, but it’s really the staff we love. The guides are amazing, and all the camp staff are so friendly.”

The other 7 guests didn’t arrive for lunch as expected so we tucked into the grilled fish, salad and pasta. We were just about to start dessert when the excited party of 7 arrived into camp. 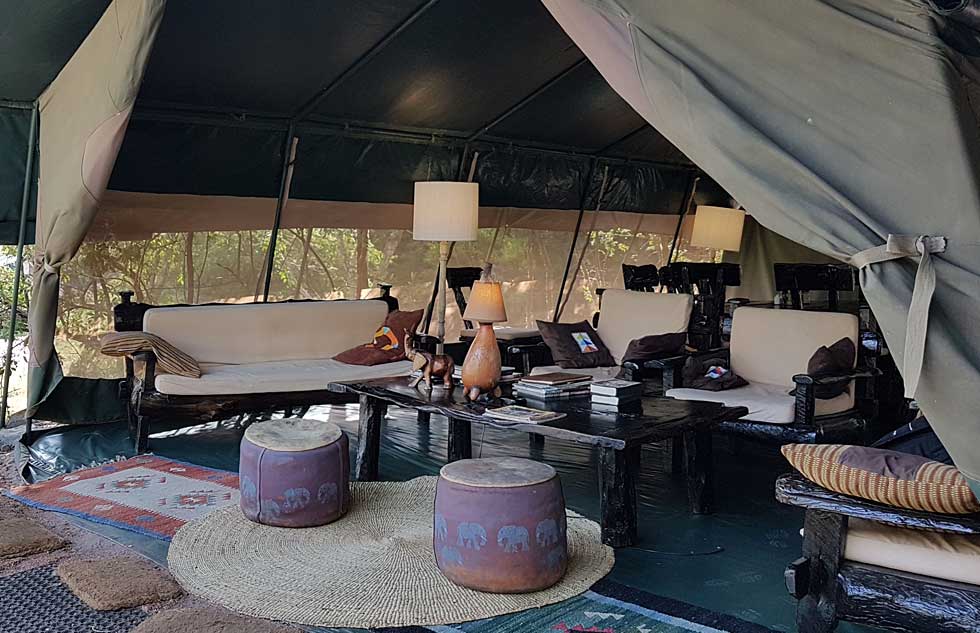 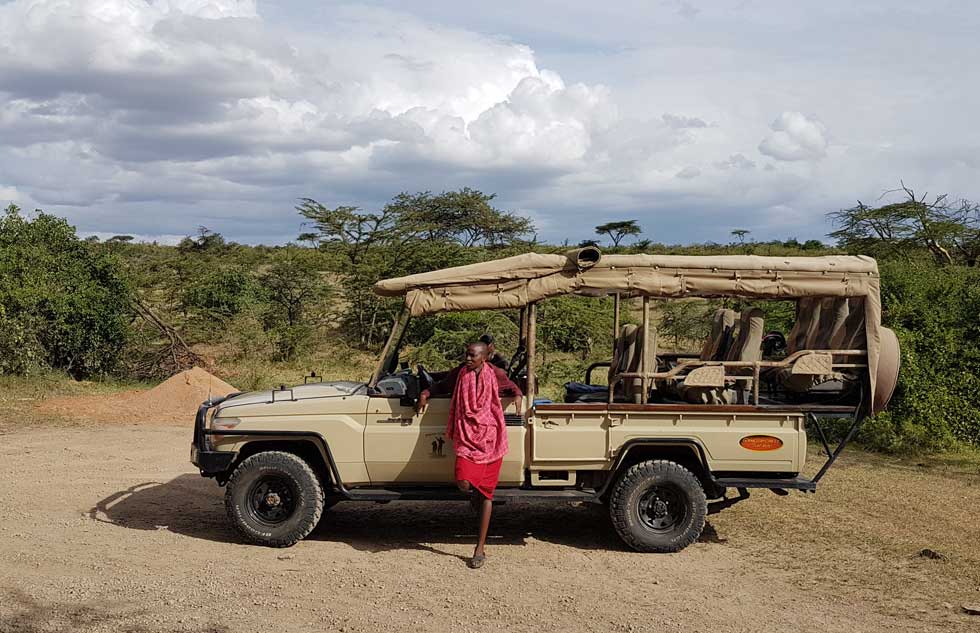 “We wouldn’t go anywhere else. The camps are comfy, and in great spots, but it’s really the staff we love.” 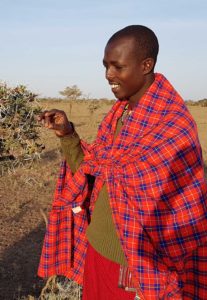 “We’ve just seen a giraffe give birth!” said one of the girls. “We saw the legs sticking out and waited and waited. It was ages, but it was so worth it.”

It turns out that this was a highlight of an already great morning of wildlife viewing in the conservancy, with elephants, zebras, wildebeest, Thomson’s and Grant’s gazelles, and best of all, a leopard. They were happy people.

Ol Kinyei Conservancy was the first of the Masai Mara conservancies to be set up back in 2005. Jake Grieves-Cook negotiated with Maasai landowners to agree the use of the 6,700 acres as a wildlife conservancy with safari camps for guests. It worked. Today the conservancy, which has now grown to 18,700 acres, is just one of 14 skirting the Masai Mara National Reserve. It’s good for the wildlife, as they have a wider safe area to roam than previously; it’s good for the Maasai landowners as they get an income from their land plus other benefits to help their communities, and  grazing rights on agreed terms; it’s good for the environment since over-grazing is stopped and the flora is allowed to recover; and it’s good for wildlife lovers like me, as we can come and enjoy a vast area of unfenced land in the Masai Mara ecosystem with only very few other lucky guests. 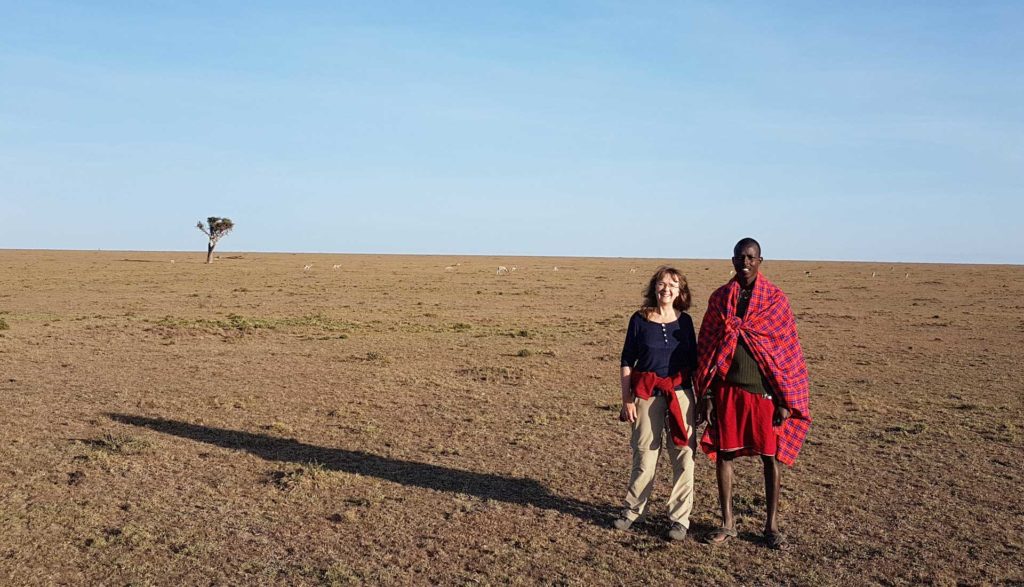 Ol Kinyei is just north east of the Mara Reserve. The terrain makes it particularly good for giraffes, such as the one that had just given birth, as they love the yellow acacia trees which are prolific here. However, its open plains are also perfect terrain for cheetahs which are relatively commonly sighted, and leopards love it here too. In fact, in June 2017 Porini just opened another camp further north in the conservancy, called Porini Cheetah Camp. I went to see it whilst staying at Porini Mara, and loved the location by a huge rock and salt lick, and enjoyed meeting the new hosts. I’m sure this too will be a success. 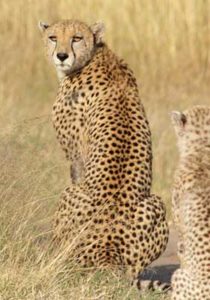 I had only 1 night here, so the next morning I decided to try out the walking safaris the camp offers. My excellent Maasai guide, Wilson, and his spotter, Marima (armed with bow and arrow!) were joined by a trained firearms ranger who walked with us. Just me, two Maasai and a man with a gun wandered across open plains for about an hour from around 6.30am, before it got too hot.  I learned about some of the trees, was shown how whistling thorn acacias protect themselves with the help of ants which live in galls on the branches, and simply enjoyed the freedom of walking in the middle of nowhere in Africa, with plains game dotted all around us.

Porini Mara is not one of the most luxurious camps in the Masai Mara area, but as David and Carol said, the tents are comfortable, I found the guiding to be good, the food is homely tasty fare (for dinner we had tomato soup, lamb with roast potatoes and vegetables, followed by a chocolate pudding), and the all-male Maasai staff are indeed very friendly and willing to make your stay as good as they can. Staying here, you’re allowed to game drive not only in Ol Kinyei, but also the neighbouring Naboisho, and the camp can also take you for a day trip into the national reserve should you wish.

I can see why David and Carol keeping coming back. I will be back too!

“Its open plains are the perfect terrain for cheetahs.”

Amanda Marks, Tribes’ director, was on the inaugural flight of Ruaha Balloon Safaris on 24th June 2018.

AFRICA – The diversity of the Cape

David Attenborough’s ‘Africa’ this week was all about the Cape  From the heights of the Drakensberg to the swamps of Mozambique’s Gorongosa, the programme really showed the diversity of this massive area.