Brandishing a graphic, over-sized wooden phallus, a young man dressed rather like a pantomime clown gambols across the monastery’s courtyard. He stops, paces about impetuously and then, to loud guffaws, waves it at the crowd. A second appears toying with another which he slaps repeatedly against his palm. There is mischief and bawdiness in the air. An audience of high monks and regular people – parents, grandparents and children – titter gleefully. And the show goes on. 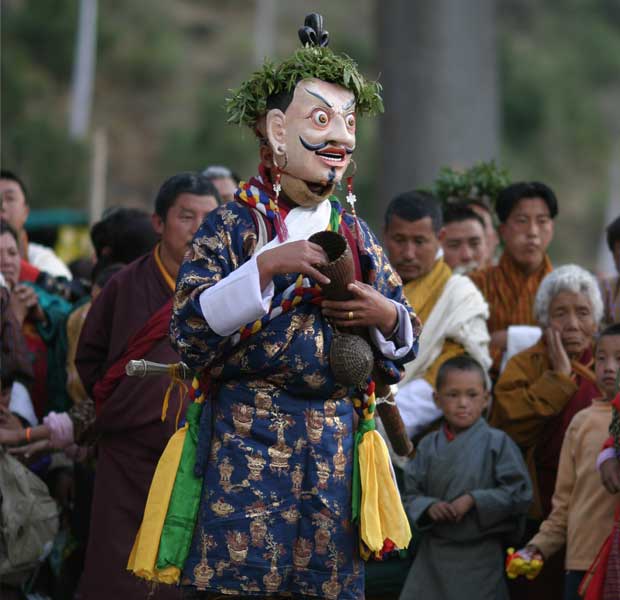 This is the Himalayan kingdom of Bhutan, perhaps the last word in exotic destinations and probably the world’s only proponent of ‘gross national happiness’ over gross national product. I suppose a few prudish onlookers might find this peculiar display a tad gross but there’s no denying the audience’s general appreciation, if not happiness, on the day.  Mystique aside, most foreign tourists are drawn to the country’s distinctive Buddhist culture and spectacular dzongs, or fortress monasteries, set against an impressive backdrop of gorgeous mountain scenery.

Bhutan’s religious festivals form a particularly important part of the local ‒ and tourist ‒ calendar. The best known of these are tshechus, typically three- to five-day events held to honour Guru Rinpoche, a heroic 8th-century Indian sage whose epic travels were pivotal in bringing Buddhism to Bhutan and Tibet. His role here has never been forgotten but the Bhutanese have elevated his memory into a striking combination of social gathering, morality play and spiritual instruction. Every district dzong (and many villages, too) hold an annual tshechu at varying times of the year and traditionally mere attendance brings merit.

Topping the tshechu list is the one held in Thimphu, Bhutan’s capital, from the tenth day of the eighth lunar month ‒ usually September or October. Thousands of Bhutanese throng a large open courtyard fronting the imposing Trashi Chhoe Dzong, a huge building (and seat of government) built in the 1960s using time-honoured traditional techniques. It’s an occasion for locals to dress in their finest clothes, eat, drink and enjoy a pervasive bonhomie.  Four days of dancing and socialising peppered with a dash of bawdy humour prevail but at its heart this remains a profoundly spiritual event overseen by senior monks, nobility and officials. 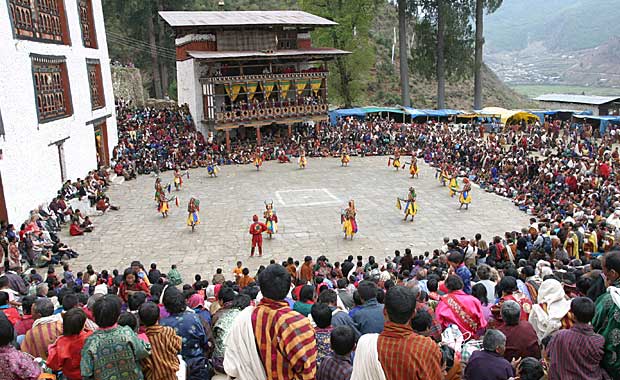 Like the hundreds of Bhutanese making their way on foot to Trashi Chhoe Dzong, foreign visitors should adhere to a dress code – no T-shirts, tank-tops, sandals and shorts. Our ‘smart’ but dull efforts paled beside the locals in their kaleidoscopic array of colours: the men in ghos (knee-length robes), the women in tight- fitting kiras (long dresses with blouses and short jackets). Set against the backdrop of a medieval-looking monastery cradled by forested hills, the event is such a visual feast that merely the faintest understanding of proceedings makes it readily accessible.

We’d arrived to find the place filled with an expectant audience. Dignitaries and lamas gazed down from the dzong’s high verandah, while an orchestra of monks armed with gongs, cymbals and horns sat to the side. As the day wore on, troupes of men and women appeared periodically to sway and gyrate gently in gleaming silk costumes. These were folksy dances ‒ clean wholesome entertainment, elegant but seemingly without real edge. Their performance was punctuated by the appearance of those cavorting and frolicking ‘clowns’ who admonished and teased sections of the appreciative crowd. 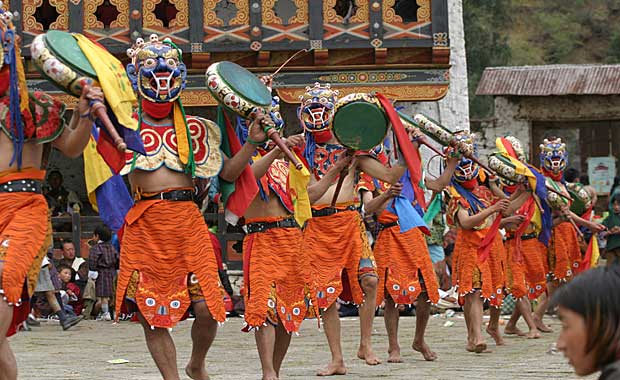 But it was mostly the spectacular cham dances that grabbed one’s attention and held our interest. Performed by monks or dancers from Bhutan’s Royal Academy of Performing Arts, they wore haunting masks of animals and grotesque demons over magnificent billowing costumes of silk brocade.

Some of these dances have names reminiscent of a gothic horror movie – ‘Dance of the Lords of the Cremation Grounds’ or ‘Dance of the Terrifying Deities’ – but most recount significant episodes in the lives of Buddhist teachers and elements of theology. This, I was told, was how Bhutanese once learnt about their faith. Watching the performers twirl and gyrate, duck and weave, it seemed their routines have hardly changed in centuries.

So I sat back and relaxed as the Black Hat dancers’ complex rituals – every hand gesture and footfall, each tassel and accoutrement loaded with meaning – get on with the serious business of taming malevolent spirits.

It’s rare that you come across anything on this earth that hasn’t also been thought of by someone else in a totally different region.

I have seen photos of people sitting with meerkats before, but I always imagined that you would probably need a lot of time and patience, or just very good luck, to have that kind of experience.