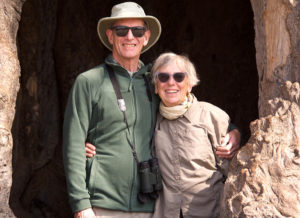 The historic Kaalvoet Vrou (Barefoot Woman) statue stands proudly in South Africa’s Drakensberg Mountains. It commemorates Voortrekker Susanna Smit who, in 1837, said that she would rather walk barefoot back over the Berg than live under British rule. Bridget and Andrew Batchelor went in search of her…

We’re here – but are we there?  We should be, but here is just a small scruffy bit of tarmac behind a rusty fence and an open gateway.  No sign, no explanatory panel – and no sign of a statue.  ‘Drive for 25 kms on the gravel road’ the instructions had said, which is what we’ve done. So, are we there?

“Let’s look round,” suggests Andrew.  “There might be at least a decent view.  After all, the Voortrekkers were supposed to have thought this was the Land of Milk and Honey.”

Out of the car, we are swept by a chilly breeze. It is after all winter here in South Africa and we are quite high up.  But the air is clean, fresh, delicious.  The dust our car had kicked up has settled.  We are miles – correction, kilometres – from anywhere, the only sounds are distant bird-song and the odd hum of an insect.  The sky is an amazing, clear blue.

At the back of the car-park is a gap in the rusty fence.  Two gate-posts sag at different angles.  It looks like humans are meant to be here, and guided off somewhere, so we take the hint.  Around a bend in the path, we stop dead.  The view down, down, down over a succession of rolling hills, lush and inviting even in winter, takes our breath away.  If this is what those Trekkers of long ago saw, then no wonder they thought they had been guided by God to this land.  Even today there is nothing but emptiness; no roads, no farms, no sign of man.

“No wonder they went for it,” I whisper.  “They couldn’t have known the Zulus had got there first.”

We drink in the view in silence.  A piercing bird call seems to accentuate the isolation.  There is just the blue sky and the wind and the emptiness and the promise of a place to settle in peace, to live life as you want without interference, to worship as you please.

After a few more moments of awed contemplation, we turn back.  Andrew says idly “I wonder why someone put a scarecrow up there?”, and points to the skyline to our right.  There indeed is a scarecrow, coat flapping in the wind, seemingly protecting nothing from the odd bird of prey.

We decide to investigate.

We scramble up the steep slope, following a dusty half-path.  As we approach from behind, the penny drops. 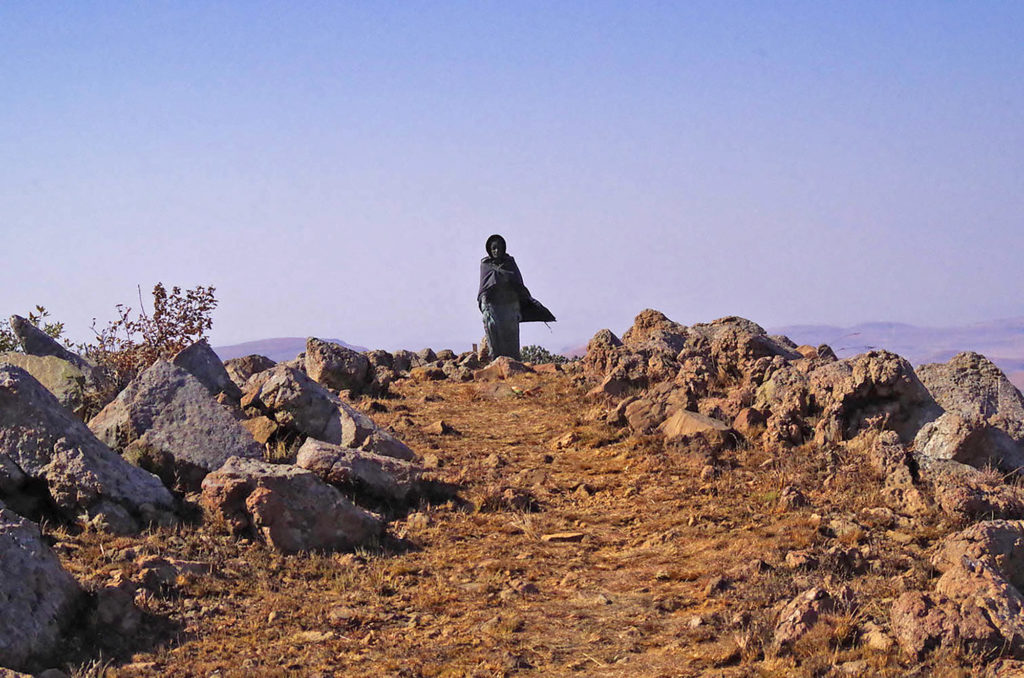 And we were.  On this little ridge in the middle of nowhere, Susanna Smit strode back the way she and her people had come.

The original sculptor had given her wind-swept hair and skirts wrapped around those resolute legs with their bare feet.  But someone visiting one of the lesser-known Boer landmarks  – a descendant of those stalwart Trekkers, maybe? – had wrapped her in a plaid blanket, fastened with what looked like a giant kilt-pin.

Someone had wanted to leave a message to future visitors that the story of Susanna had not been forgotten.  To someone, Susanna was a woman of huge courage whose public declaration that she would rather walk back barefoot the way they had come than live under British rule had changed her people’s history.

We walk all the way round the life-sized statue, in awe of yet another Boer statue which told its own story, and of the visitor who had left this tribute, now flapping in the winter wind.  There was no explanatory plaque.  There was no need.  Anyone who took the trouble to come to this landmark knew the story behind what they would find.

We take some photos, trying to do justice to the location’s loneliness and resolution.  Then we walk in silence back to the car, turning back as we reach it for one last look at the scarecrow figure highlighted against the cloudless sky, forever telling, in one piece of cast bronze, one of the more powerful Voortrekker tales. 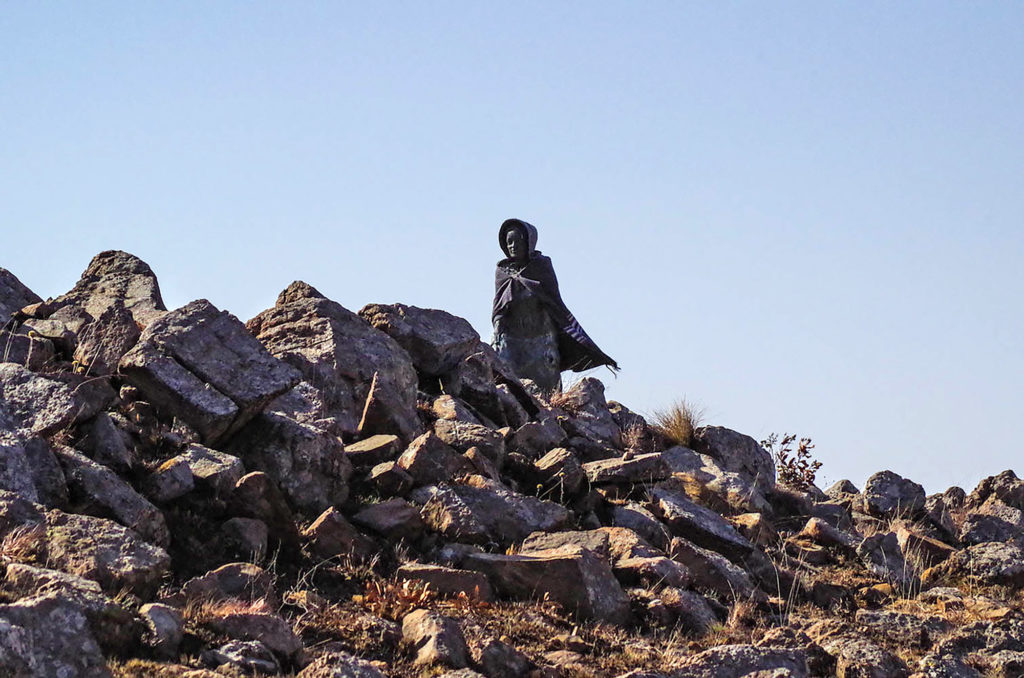 Our thanks to Bridget for this lovely piece – and watch out for our ‘Face to Face With’ interview with Bridget, coming soon.

We love to hear from our travellers with tales of their trips with us. If you’d like to submit a blog post, please contact our blog editor, Karen  – she’d be delighted to chat it through with you!

KwaZulu Natal – An affair to remember

Meera Dattani is a journalist with an eye for adventure and a love of travel which brings benefits to communities and wildlife in destinations.

If you’re looking for something unique and exciting for your escape to Africa, how about being one of the very few guests at the 2018 Maasai Olympics in southern Kenya.