This beautiful national park lies at the heart of Matobo Hills, just 35km south of Bulawayo. Matobo, previously known as Matopos is often overlooked, but it’s a real gem. Matobo Hills were declared a UNESCO World Heritage Site in 2004, due to the unique landscape, distinguished by majestic granite boulders and balancing rocks that look as though they could tumble at any given moment. With no lion, elephant or buffalo you can safely explore on foot and perhaps enjoy some rhino tracking, or check out the well preserved ancient rock paintings.
Reasons to visit Matobo Hills include:

When to visit Matobo National Park

Matobo Hills can be visited all year round, but it is best in the dry season for game viewing. The bush is less dense, the grasses lower and this makes it easier to spot the wildlife.

Matobo Hills is easy to reach by car from Bulawayo or by air from further afield.

There isn’t a huge choice of accommodation in this area but Amalinda, with its 9 thatched chalets remains a popular choice amongst travellers.

Luxury accommodation in the UNESCO World Heritage Site of Matobo.

Enjoy stunning views of Matobo Hills from these lovely stone and thatch chalets.

Start planning your tailor-made holiday to Zimbabwe. Tell us what you want, and we will tailor make your perfect trip.
Call: 01473 890499
PLAN MY TRIP 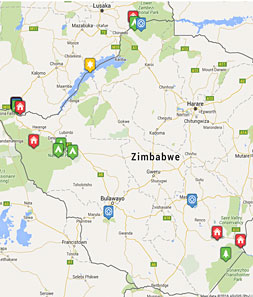 Flights from UK to Harare or Victoria Falls are usually via Johannesburg and can take 12+ hours, although once the new Victoria Falls airport is fully operational there may be an option of direct flights – watch this space.

 Language: English is the official language of Zimbabwe. Shona or Ndebele are also widely spoken by the majority of the population.

Visas are required for UK passport holders and can be obtained on entry into Zimbabwe.

Malaria is a risk in many areas of Zimbabwe.