QENP is the main safari destination for those looking for a broad range of mammals. The park covers around 2000 square kilometers where the Mountains of the Moon (the Rwenzoris) and the deep jungles of central Africa meet the rolling grassland plains of the East. The national park encompasses open savannahs and acacia woodlands as well as crater lakes and the riverine systems along the Kazinga Channel and the shores of Lake George and Lake Edward.

This is the place to see hippos and lion, elephants and antelope ”“in fact all the amazing animals you would associate with an African landscape. Here you can find herds of Ugandan kop (a type of antelope like a large impala), several species of primate including chimpanzee, an incredible over 600 species of birds, and about 20 species of predators giving the park one of the highest biodiversity ratings of any game reserve in the world. The bird specialities here include black-headed and papyrus gonoleks, blue-breasted and white-throated bee-eaters, blue-breasted kingfisher, black coucal, swamp flycatcher and finfoot.

The whole park is superb safari territory and is split into a number of different sectors. The Mweya Peninsula with its waterfront locations is the place to see elephants and hippos, giant forest hog and kop, whilst the remote Ishasha sector is known for its tree-climbing lions. You might see chimps at the Kyambura Gorge, and the Maramagambo Forest is home to numerous forest monkeys and birds. Flocks of flamingo are resident on the crater lakes. 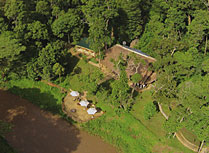 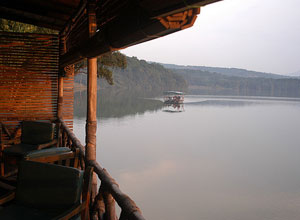 A lovely rustic lodge on a crater lake in Queen Elizabeth National Park.

Mweya is a large lodge with amazing views in the heart of Queen Elizabeth National Park.

Start planning your tailor-made holiday to Uganda. Tell us what you want, and we will tailor make your perfect trip.
Call: 01473 890499
PLAN MY TRIP

Direct from UK flights 3 times a week or daily via Nairobi.

Visas are required for UK citizens which can be purchased on arrival at the airport. Passports must be valid for at least 6 months.

No compulsory vaccinations but several are recommended and you should take malaria prophylactics.