The Virunga Mountains are a range of six extinct and three active volcanoes on the border of Rwanda, Uganda and DRC. Within them lies the Volcanoes National Park (Parc des Volcans) protecting the mountain gorillas in Rwanda. The tallest of the mountains which is Karisimbi at 4507m, though they are all over 3000m tall. The landscape and vegetation is similar all sides of the borders, with swathes of bamboo forest and montane forest. This was the park in which Dian Fossey worked in her study of mountain gorilla behaviour, until she was murdered at Karisoke Research Centre in 1985. The park was closed in 1994 due to the genocide in Rwanda, but reopened in 1999.

The volcanoes are really more individual cone shaped mountains than a mountain 'range' as they sit on the fault line which shaped the African Great Rift Valley. The names of the mountains translate into local perceptions for example, Sabyinyo translates as 'old mans teeth' which relates to the jagged tops of this mountain. Muhabura is 'the guide' and is an example of a perfect cone, which glowed at night to light the way.

Vegetation on the volcanoes is similar to other East African mountains although much of the lower slopes is now cultivated by farmers. There is semi-deciduous forest up to 2800m then bamboo forest and tall hagenia woodlands. At higher altitudes there is a cover of moorland, grassland and marsh with giant lobelias towering above you, similar to the Ruwenzori Mountains in Uganda or Kilimanjaro in Tanzania. There are a total of over 1260 plant species across the range of mountains including plenty of Albertine Rift endemics.

There are enjoyable nature walks and other quite strenuous hikes to take here including a 'Golden Monkey' hike which takes about 2-5 hours and visits a troop of animals which have become used to humans. There are about 40 animals in the group. There is also a strenuous hike to Karisoke, the remains of Dian Fossey's research station and grave site which takes about 6 hours. Alternatively you can do a nature walk on Mt Bisoke which is done with a parks guide as wild animals such as buffalo may be found along the way.

Gorillas: The gorillas are obviously the main attraction in the Virungas, where about 480 of these endangered animals live, spread across 420km in three countries on the slopes of the six dormant volcanoes. Gorillas are the largest primates on earth, and have captured the imagination of humans for centuries, though the mountain gorilla was not known to science until 1902. They are found in dense forests and rainforests in just four national parks in Uganda and Rwanda, mountain gorilla numbers are small ”“ possibly around a thousand.

Mountain gorillas are immensely strong, with huge chests and a thick coat of long black hair which provides protection against the low temperatures found at altitude. In spite of their massive strength, they are gentle, shy animals, living in groups of between two and 40, and usually around 10. The leader and protector of each group is the dominant male ”“ the silverback. He has silvery gray hairs and decides where and when to rest, sleep and forage for food ”“ mountain gorillas are herbivores, eating over 100 species of plants. He also acts as the peacemaker of the group, settling disputes.

Mountain gorillas live for 40-50 years but in that time a female may only have between two and six offspring, with this slow rate of reproduction contribution to the species’ threatened status, something which is exacerbated by their main predator - humans. Females usually produce a single young, though twins are sometimes born. A tiny newborn weighs just 1.8kg, but develops about twice as fast as human babies. When fully adult, males are up to 1.8m tall and weigh around 160kg, with females up to 1.5kg tall and weighing some 97kg.

The terrain in the Virungas is hilly, very muddy and tracking gorillas can involve climbing through dense vegetarion - be prepared for a tiring day and the trek could take anything up to 8 hours, though they are usually found in around 2-3 hours.

A simple but comfortable and friendly lodge, ideally located for trekking the gorillas.

High quality lodge from which to visit the mountain gorillas.

Virunga Lodge offers supremely comfortable accommodation in a stunning location, and has an eco-sensitive design.

Start planning your tailor-made holiday to Rwanda. Tell us what you want, and we will tailor make your perfect trip.
Call: 01473 890499
PLAN MY TRIP 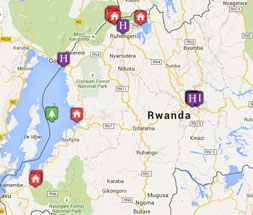 Various airlines fly to Kigali including Kenya Airways via Nairobi.

Entry visas are issued on arrival, entry fee is $30, to British passport holders.

Rwanda is a malarial country but the risk is low as most of the country is at high altitude. The following vaccinations are recommended: Hepatitis A & B, Polio, Tetanus & Typhoid. Yellow fever vaccinations is compulsory. Seek advise from your GP.