The capital and largest city in Nepal, Kathmandu dominates theKathmanduValleyat the heart of the country. It is an incredibly vibrant city, with a fascinating medieval character. The narrow streets are often clogged with traffic and the city suffers from pollution and overpopulation, putting a great strain on the electricity and water supply. However, take a little time to explore the city and you will be rewarded with bustling markets, fabulous temples and a surprisingly laid-back atmosphere.

At the centre of the city, Durbar Square has some of Nepal's finest traditional architecture, with several fine wood-carved buildings.Kathmanduitself took its name from a building known as Kasthamandap (the 'House of Wood') which is still in the centre of the old city. The nearby 'Kumari Bahal' (House of the Living Goddess) is a temple which has the unusual honour of being home to a living goddess. She is rarely seen outside of the temple, but you may get a glimpse of her in her inner courtyard.

The Thamal District andFreak Streetwere famous stopovers for hippy travellers a generation ago, and today are full of shops, bars, restaurants and hotels. Further out, the Swambhu Temple (better known as the monkey temple) and Boudhanath are fascinating Buddhist sites on the outskirts of the city, while Pashupatinath is a famous Hindu shrine.

A showcase of Newari architecture, Dwarikas is Kathmandu's most luxurious heritage hotel. 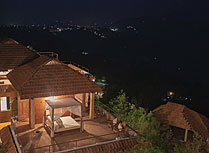 Located on a hill above Dulihkel, this mountain resort offers a high quality of accommodation and service. 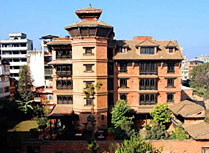 Kantipur Temple House is a 42-room hotel in traditional Newari style in the heart of Kathmandu. 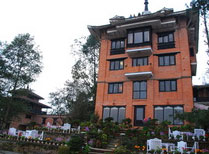 The first and best resort hotel in Nagarkot, The Fort sits at the top of the Northern Ridge and enjoys unobstructed of the Himalayas.

Start planning your tailor-made holiday to Nepal. Tell us what you want, and we will tailor make your perfect trip.
Call: 01473 890499
PLAN MY TRIP

There are several airlines flying to Nepal via the Middle East with flight times of 10 to 15 hours depending on the length of the stopover.

 Language: Nepali is the official language and there are many other minority languages. English is widely spoken by people involved in the travel industry.

Required for British citizens, can be obtained on arrival at the airport.