The small town of Bandipur straddles the ridge of a hill overlooking the Kathmandu-Pokhara road. About 3 hours drive from Kathmandu, Pokhara or Chitwan, it is a great spot to break your journey and explore traditional Nepalese life.

The town has a population of around 10,000 people, mostly from the Newari and Magar ethnic groups. It was once an important stop on the trade route between India and Tibet, and most of its fine architecture and temples date from this more prosperous era. The town fell into decline in the 1970s when the main highway passed it by, but the lack of development has helped preserve many beautiful buildings which were destroyed elsewhere in Nepal. In recent years, the town has seen a revival in its economy as a tourist centre, with the construction of a good road linking it with the highway.

Bandipur sits at an altitude of just over 1,000m, and enjoys spectacular mountain views. A single main street runs along the ridge, lined with traditional buildings, some of them in poor repair but many beautifully restored. Traffic is banned form the main street, giving a sense of peaceful seclusion which is rare in Nepalese towns. The area around Bandipur has many traditional villages as well as small shrines and temples, and a walk around the region is very rewarding. There are also longer walks, including a downhill hike to the Siddha Cave, said to be the larges cave in Nepal.

In the small town of Bandipur, Gaun Ghar offers a simple base to explore traditional Nepalese life.

Start planning your tailor-made holiday to Nepal. Tell us what you want, and we will tailor make your perfect trip.
Call: 01473 890499
PLAN MY TRIP 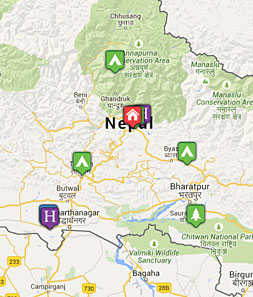 There are several airlines flying to Nepal via the Middle East with flight times of 10 to 15 hours depending on the length of the stopover.

 Language: Nepali is the official language and there are many other minority languages. English is widely spoken by people involved in the travel industry.

Required for British citizens, can be obtained on arrival at the airport.