Located in the northern Mozambique regions of Cabo Delgado Province and encompassing nearly one third of the Niassa Province, this Reserve is twice the size of Kruger National Park in South Africa, and has the highest concentration of wildlife in Mozambique which makes it a unique safari experience.

Niassa Reserve is one of the largest protected miombo forest ecosystems in the world, and is also the largest conservation area in Mozambique. There are huge areas of wild bush, impressive granite rock formations, huge baobab trees and utter solitude ”“truly a magnificent wilderness experience.

This is a birding paradise and big game such as elephant, buffalo, hartebeest, eland and zebra are found in good numbers. Other game such as impala, wildebeest, hippo, lion, leopard, warthogs and spotted hyena can also be seen.

Start planning your tailor-made holiday to Mozambique. Tell us what you want, and we will tailor make your perfect trip.
Call: 01473 890499
PLAN MY TRIP 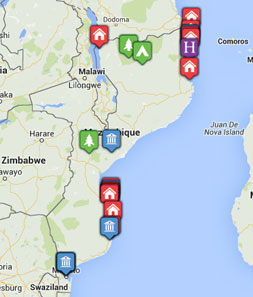 No direct flights from the UK, but daily access is via Johannesburg or Dar Es Salaam. There are light aircraft connections to the more remote islands and reserves.

 Language: Portuguese is widely spoken in Mozambique and remains the main language. English is understood in a few larger towns.

Most nationalities do need a visa for Mozambique

This is a malarial area and several vaccinations are receommended.