The Nyika  is an area of dramatic landscapes with lower slopes covered in brachystagia woodland and a high plateau of rolling grasslands and hill with montane forests. From the top where Chelinda Lodge is situated there are 360 degree views.

The word Nyika means wilderness and this wild vast area of Malawi has probably remained the same for many centuries. Some ancient rock paintings have been found at Fingira Cave in the southern part of the plateau but the area was never properly settled or colonised. The first explorers from Europe came here in 1894 with the Scottish missionaries came to the area, their station at Livingstonia, towards the northern part of the lake is still a thriving centre now and makes a fascinating stop. Hiking trails over a few days can be linked from Nyika to Livingstonia.

The wide open spaces at Nyika are perfect for horse riding.

Nyika National Park was established in 1965 (the first in Malawi) though it has grown in size since then. The plateau is roughly 50km by 80km at its furthest points. It also extends into part of Zambia. The climate on the Nyika is different to the rest of Malawi being much cooler with clean mountain air and outstanding views. There are several peaks above 2000m, the hightest being Nganda Peak at 2607m.

Wild flowers are also an attraction here with the best time being September to April when the grasses are covered with colour. There are also over 200 species of orchid.

The only natural lake on the Nyika is Lake Kaulime which has many local folklore tales attached to it. Roan antelope are often seen here feeding on reed shoots. >Other mammals here include zebra, roan, reedbuck, eland, bushbuck, warthog, bush pig, leopard, hyena, side striped jackal and serval. Birding here is spectacular with over 400 species including quite a few endemics. 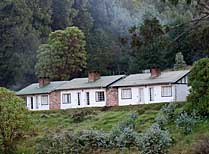 Chalets in a lovely setting around a large dam on the Nyika Plateau. 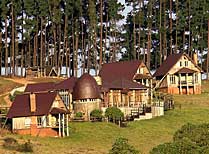 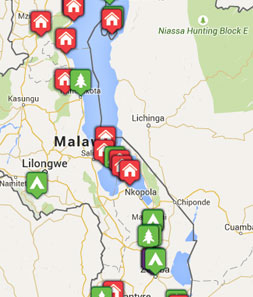