Samburu, Buffalo, Shaba and the north

Samburu National Reserve and Kenya’s northern reserves add a new dimension to Kenya’s already rich store of game drive opportunities. As well as lion, elephant, zebra etc., the area is home to desert-adapted animals and species not found in the more frequently visited parks further south.  The Samburu people are incredible guides and this region offers a fascinating insight into their culture.
Reasons to visit Samburu, Buffalo, Shaba & the north include:

When to go to Samburu, Buffalo, Shaba & the north

The best time of year to visit Samburu would be during the dry seasons.  These are June to October and December to March.  The rains often make traversing the area more difficult and the game disperses when water is plentiful.

You can either fly or drive to Samburu from Nairobi.  It takes about 5 and a half hours to drive, or the flight is a little over an hour (depending on whether it’s direct or not). Samburu works well combined with Kenya’s well known Masai Mara or Amboseli reserves to give a unique Kenya safari experience.

Samburu has plenty of accommodation options, from tented camps to lodges, from deluxe to basic.  Elephant Watch Camp is one of our favourites, offering superb hospitality and game viewing.  There are also a number of lodges and camps that work together with worthy community projects and environmental causes, Saruni Samburu.

Desert Rose is a small lodge accommodating up to 12 guests in the far north of Kenya at the southern end of Lake Turkana.

Elephant Watch Camp is a small, unfenced, eco-friendly camp in the Samburu, home to Save the Elephants project. 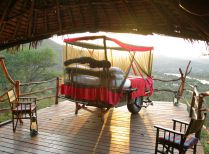 The starbeds offer a unique experience in wild surroundings, sleep under the stars in a beautiful location.

An upmarket tented camp in the heart of the Loisaba private wildlife conservancy. 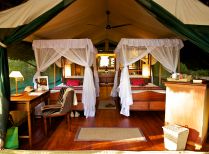 A comfortable tented camp enjoying a riverside location in the Samburu National Reserve.

A stylish lodge on tribal lands just north of Samburu National Reserve in a stunning setting. 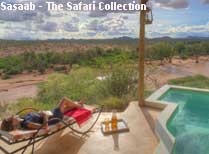 A gorgeous luxury getaway lodge in the heart of Samburu land 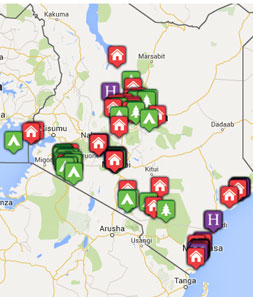