Previously known as Bombay, Mumbai is the capital of the state of Maharashtra and the most populous city of India. By some measures, it is also the most populous city in the world with an estimated population of about 14 million (or more than 20 million if you include some of the outlying suburbs). The city was originally built on an archipelago of seven islands, which land reclamation has merged together into a single island, with the city also sprawling onto the adjacent mainland. After the opening of the Suez Canal, the deep natural harbour became the most important port in Mumbai and today the city handles more than half of India's cargo.

Mumbai is the commercial and entertainment capital of India, and houses important financial institutions and the corporate headquarters of many Indian companies. Mumbai is also home toIndia's Hindi film and television industry, known as Bollywood. Immigrants come from all overIndia, and have pushed land prices in central Mumbai to incredible levels, so property prices in the heart of the city exceed those of downtown Manhattan. Mumbai is a city where the rich rub shoulders with the poor, and corporate managers and Bollywood stars live a short drive away from the teeming slums of Dharavi.

With its melting pot of cultures, Mumbai is home to a bewildering variety of religions. Within the space of a few hours, it is possible to see Hindu, Jain, Zoroastrian and Buddhist temples, Islamic mosques, Jewish synagogues and Christian churches from a variety of denominations. An incredible variety of languages are spoken in the city, with a similar mixture of festivals.

Colaba is the heart of the old city, crowded with colonial architecture. The best buildings of the period built in an Indo-Saracen style can be found facing the open space of Oval Maiden. At the tip of Colaba is the landmark Gateway to India, while further inland are many modern shops and restaurants. Marine Drive runs along the bay, faced with some of Mumbai's grandest hotels, leading to the famous Chowpatty beach. Further afield, you can visit cave temples dating from earlier in Mumbai's history, including the famous caves of Elephanta Island, about an hour by boat from the centre of the city. 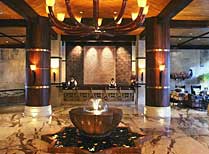 Fariyas Hotel is a short walk from the Gateway to India in central Mumbai and offers well equipped accommodation and a full range of amenities.

One of Mumbai's landmarks, the Taj Mahal Palace & Tower has opulent decor and great views.