Varanasi, also known as Benares and Kashi, is purported to be the oldest continuously inhabited city in the world. Legend has it that the city was founded by Shiva, Lord of the Universe, making it is one of the most important pilgrimage sites in India. Situated on the banks of the sacred Ganges River, the city has been a centre of learning and civilization for over 2000 years. Varanasi derives its present name from the two tributaries of the Ganga - Varuna andAsi - between which it is situated.

Varanasi''s principal attraction are the bathing ghats (steps), which line the west banks of the Ganges. Each evening an aarti service at Dashashwamedah Ghat blesses the Ganges, and an early morning river cruise is a must to see life awaken along these steps. There are about 80 ghats in Varanasi, each with its own significance. Manikarnika and Harishchandra ghats are the ghats used for the cremation of the dead, and their pyres can be seen burning by day and night.

Varanasi is probably the holiest city in India and contains many temples. The most important temples include Vishwewara Temple or the Golden Temple, the main temple of the city dedicated to Lord Shiva, Durga Temple or the Monkey Temple, dedicated to Goddess Durga and the Bharat Mata Temple which was inaugurated by Mahatma Gandhi.

A short drive from Varanasi lies Sarnath, one of the most important Buddhist sites marked with a large stupa and an Ashoka pillar. The Lion Capital which once topped the pillar is now the symbol of India and is featured on the Indian flag. The well preserved sculpture can be seen in the nearby site museum. Although few of Varanasi's population are Buddhist, Sarnath attracts pilgrims from many Buddhist countries including Japan and Sri Lanka. 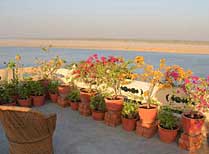 Located on the banks of the Ganges, the Ganges View is one of Varanasi's most characterful and best located hotels.

Suryauday Haveli is a small hotel located near Shivla Ghat on the Ganges River in Varanasi.

Set in several hectares of gardens, the Taj Ganges provides a haven of peace in this bustling city.