Dudhwa Tiger Reserve is in the Terai of Uttar Pradesh, near the Nepalese border. The reserve was created in 1987 as part of the Project Tiger programme and is made of up of 3 separate parks: Dudhwa National Park (600 sq kms), Kishanpur Wildlife Sanctuary (230 sq kms) and Katarniaghat Wildlife Sanctuary (400 sq km) and is linked to Pilibhit Tiger Reserve by a tiger corridor. These parks share lush forests, grasslands and wetlands including rivers, lakes and marshes. They are home to a wide range of wildlife such as tiger, leopard, swamp deer (barasingha), one-horned rhino, elephant, Asiatic black bear, sloth bear, hispid hare, crocodile, gharial, gangetic dolphin  and around 500 species of birds.

Dudhwa is more remote and less well known than many national parks in India and consequently receives fewer visitors with the advantage that you are unlikely to encounter many other people and often have sightings to yourself.

Dudhwa has a humid sub-tropical climate. In winter, mid-October to mid-March temperature range between 10° C and 30° C, rising a little from February to April. From May to June (summer) temperature can reach 40° C and the monsoon arrives around mid-July and lasts till mid-September. Generally the best time to visit is between November and April, though the park remains till mid-June. It closes for the duration of the monsoon, re-opening in mid-November each year. 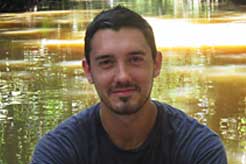