The National Chambal Sanctuary encompasses a stretch of the Chambal River 250 miles long from the barrage at Kota to its confluence with the Yamuta near Agra and is up to 4 miles long. The Sanctuary was established in 1979 as a protected area and was opened up to tourists in 1999.

According to myth, the Chambal River originated from the blood of thousands of cattle slaughtered by the Ayran King Rantideva, and thus has an “unholy” origin which has helped protect it from human intervention. The Chambal is the only river in India to flow northward from its origin in the Vindhayan Range, and much of its length is lined with mud cliffs which provide shelter for wildlife.

The Chambal River is one of the last surviving refugees for the critically endangered Gharial. These long-nosed crocodiles feed only on fish, and rarely leave the water. Pollution and hunting brought the species to the verge of extension in the 1970s, and the Chambal River is a vital breeding ground. The Chambal River is also one of the best places in India to see the rare Gangetic River Dolphin, which only breeds in exceptional clear rivers. The banks of the river are home to many resident and migratory birds, including the acrobatic Indian Skimmer which is rare elsewhere in the country. Together with 8 species of turtle and the marsh mugger crocodiles, this is a rich region for wildlife.

The Chambal River can be reached in a day trip from Agra, but it is much better to stay in the Chambal Safari Lodge a couple of hours from Agra to experience the wildlife at sunset and sunrise and explore the rich culture of the region. 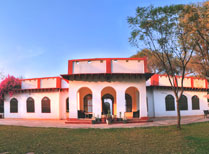 Set in farmland, Chambal is a great place to experience rural Indian life and nature about one hour from Agra.