Largest and busiest of Tamil Nadu'’s temple towns, Madurai, the "city of nectar", is one of the oldest cities in South Asia. Located on the Vaigai River, it was the capital of Pandyan rulers until the 14th century. The Pandyan king, Kulasekhara built a temple around which he created a lotus-shaped city. Legend has it that when city was being named, Lord Shiva blessed the city and its people. On this auspicious occasion some divine nectar ("Madhu") fell from the hair of Shiva and hence the city was named "Madhurapuri".

The city is bustling, chaotic and crowded, but nevertheless offers some remarkable sights and a fascinating taste of Tamil culture. The month-long Chithrai Festival in the heat of April and May is a spectacular pageant, but if Madurai is oppressive at the best of times, during Chithrai it is unbelievable. The Teppam Festival in January and February is at a cooler time of year.

Madurai revolves around the famous Sri Meenkashi temple at the heart of the city which is the main reason for visiting, but there are other sites here such as Tirumalai Nayak Mahal, an Indo-Saracenic palace built on a grand scale with a beautifully sculpted dancing hall, and the Ghandi Museum which tells the story of Indian independence Madurai is also an important textile centre, and the bustling markets here are fascinating with their reams of beautiful fabrics. 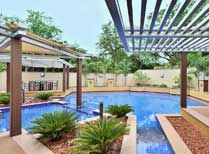 Sleek modern hotel with a good range of faciilities including a pool and gym, and spacious en-suite rooms. 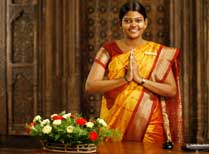 A traditionally styled building with spacious rooms and villas, a lovely outdoor pool, restaurant, coffee shop and spa, a short drive from the city of Madurai.