Karnataka is a state in southern India which includes thriving cities such as Bangalore, peaceful coffee plantations in the hills, towering temples testament to past dynasties, the largest Tibetan settlement outside Tibet and impressive archaeological sites. Its native Kannadiga people are joined by many other ethnic groups and the state has a rich cultural heritage, which is also reflected in its varied cuisine and its many festivals.

Reasons to visit Karnataka include:

Karnataka can be visited all year, although the monsoon occurs between July and September. The weather is at its most pleasant from November to March, the winter, with temperatures rarely topping 32Â°C. The weather is hotter from April to June, making this is a good time to visit the hill stations.

There are direct flights from the UK to Bangalore, the main gateway for international travellers visiting Karnataka.

Depending on the location you can stay in a modern city hotel, on a working coffee plantation, a stylish resort complete with spa and pool and at a family home set in pretty gardens. The variety of accommodation will be part of your holiday.

Stay in a private villa on an estate in the hills, a perfect setting for relaxing far away from the crowds and enjoying rural life.

Styled as an historic palace, this hotel is a suitably grand place from which to explore the archaeological site of Hampi. 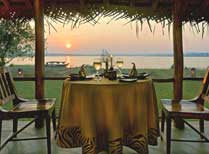 Experience the peaceful location and sumptuous accommodation at Evolve Back Kabini and enjoy jeep and boat safaris in this great wildlife habitat.

Well equipped, modern hotel with a choice of restaurants, a spa and rooftop gym and pool.