Odzala-Kokoua National Park is in the north west region of the Republic of Congo (not DRC). It became a national park in 1935, making it one of Africa’s oldest parks. It covers some 13,600 km2 of the Congo Basin, which is about 60% of the country of Congo. It is also part of the TRIDOM Transfrontier Park which includes Gabon and Central Africa too.

Within this vast expanse of trees, Odzala has permanent rivers, marshes and swamps, savannah, and there is an escarpment running roughly north-south in the west of the park.

Apart from the giant trees of the rainforest, the most famous features of the park are the bais (also known as salines). Bais are like grassy, swampy treeless islands in a sea of forest. Some are tiny, others are quite large, but what they all have in common is that they attract the wildlife out into the open to eat the salts and minerals which are found here, as well as drink and feed on the grasses.

A wildlife census was undertaken for African Parks in 2012 which estimated that there are about 9600 forest elephants, 2700 chimpanzees, and about 22,000 western lowland gorillas in Odzala. Whilst the numbers of forest elephants have risen since 2005, sadly the gorillas have declined from about 40,000 in that same period. However Odzala remains one of the best places to see these lowland gorillas.

Western lowland gorillas : There are 2 habituated family groups near Ngaga Camp ”“ Neptuno group with 16 individuals, and Jupiter with 25. Both groups are named after the dominant male silverback. Unlike in some other areas, you stand a chance of getting within about 10-15 metres of them. Up to 4 visitors are allowed up to 1 hour with the gorillas once a day, though please note that if you develop a cold, flu or other respiratory symptoms you will not be allowed to track the gorillas. The minimum age to track gorillas is 15 yrs. It has been known for the gorilla families to walk underneath the raised platforms at Ngaga.

Other primates in Odzala include central Africa’s highest density of chimpanzees (though these are rarely seen), red-tailed monkeys, Guereza colobus, grey-cheeked mangabey, moustached monkey, , ”¦ In fact there are 11 diurnal species of primate and another 6 nocturnal species.

You might want to keep clear of tree-climbing crocodiles and head-banger termites!

There are around 70 villages scattered around the edges of the park, accounting for some 80,000 people. The Mbomo tribe are mainly in the south, with Bantu and Pygmy clans found elsewhere. The local pygmy group is the Ba’Aka.

At Ngaga Camp you will be gorilla tracking with expert trackers and researchers. You will also enjoy birding walks and night walks.

From Lango Camp you will have day and night game drives in the savannah regions, take guided walks, boat trips in motorised pirogues, and you can enjoy catch-and-release fishing. Lango also has hides overlooking Lango bai.

In both camps you can expect informative talks, such as on western lowland gorilla research, conservation and biology and ecology.

Walks at both camps are at low altitude so are not difficult from that point of view.

Is it for you?

You should be aware that this is a really remote area and a full-on rainforest experience. If you don’t like bugs, like your camps to be run with perfection, and can’t cope with getting wet and dirty, Odzala is not for you.

If, on the other hand, you have a flexible attitude and can take things as they come, can enjoy the challenges that nature throws at you, and can deal with bugs of all kinds, don’t hesitate! This is a supremely special wildlife and wilderness experience that a tiny number of people each year will be fortunate enough to experience. 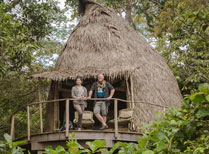 Lango Camp is on the edge of the savannah and has access to the Lekoli and Mambili Rivers and Lango Bai. 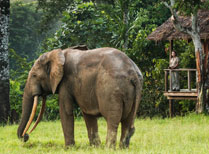 An attractive, comfortable camp from which you can explore the varied terrain and wildlife of Odzala National Park. 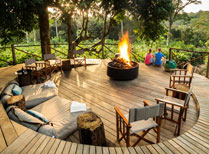 A modern, high rise hotel in downtown Brazzaville on the banks of the Congo River and just 6kms from the international airport.

Start planning your tailor-made holiday to Congo. Tell us what you want, and we will tailor make your perfect trip.
Call: 01473 890499
PLAN MY TRIP 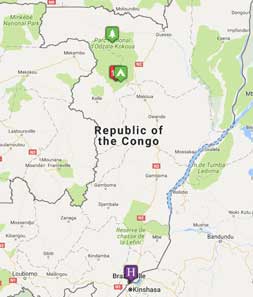 Flight time is approximately 8 hours. There are currently no direct flights from the UK.

Visas are required for British nationals and must be obtained in advance as they are not available on arrival.

Yellow Fever vaccination is compulsory and must be obtained at least 10 days in advance of travel. Malaria prophylactics are essential for all regions and all year round. No other vaccinations are compulsory.