Salvador is one of the liveliest cities in Brazil with a rich culture, beautiful beaches and attractive historic centre. Salvador is known as the African Soul of Brazil due to the legacy of the slave trade, and approximately 80% of the population are of Afro-Brazilian descent. It is divided into the upper, Cidade Alta and lower, Cidade Baixa, cities. Cidada Alta includes the Centro Historico, also known as Pelourinho, a national monument and UNESCO World Heritage Site with some of the most important examples of colonial architecture in Latin America.

When to go to Salvador

The city can be visited at any time of year, though April to June are the wettest months. The temperature varies little year round, but is generally higher from December to March, and these months tend to be busiest in terms of visitor numbers. July is another busy month with Brazilians taking their winter break. Carnival occurs at the end of February or beginning of March, which you may either want to experience or to avoid.

Comfortable accommodation, sunny terraces and a rooftop pool in the heart of the historical district of Pelourinho, Salvador.

Hotel Porto da Lua enjoys a beachfront setting near the resort of Praia do Forte, and is an excellent place to relax.

A city centre hotel in 2 historic mansions with courtyards, cosy rooms and a rooftop terrace.

Pousada des Arts is a beautifully restored colonial mansion in the historical centre of Salvador city.

287 room resort set behind miles of white sand beaches on the Bahian coast of northeast Brazil.

Start planning your tailor-made holiday to Brazil. Tell us what you want, and we will tailor make your perfect trip.
Call: 01473 890499
PLAN MY TRIP 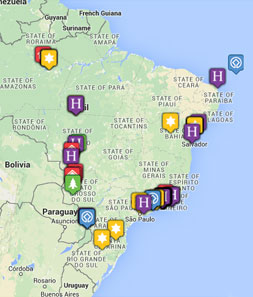  Language: Portuguese is the official language. Spanish and English are understood quite widely.

Not required for British nationals.

There are no compulsory vaccinations, except yellow fever if you are coming from an infected area. Malaria prophylactics are recommended in the rainforest.